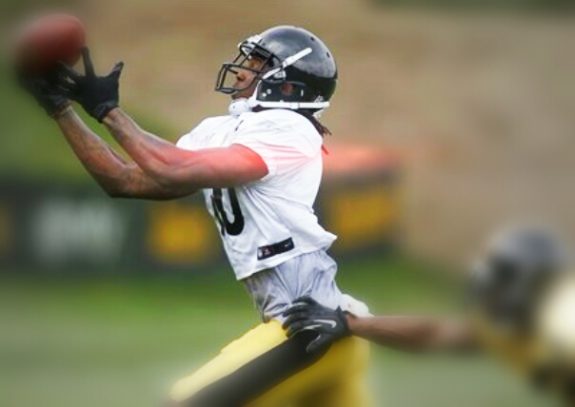 In their final week of training camp in 2015, the Pittsburgh Steelers continue to give repetitions with the first team to young players and rookies ahead of their third preseason game against the Green Bay Packers.  Mike Tomlin and the coaching staff are fully evaluating a nice group of talent in the hopes of finding critical pieces to their team.

On Monday, the following players were given some down time or were off and out of the scorching sun due to coaching decisions: David Nelson (WR), C.J. Goodwin (WR), Cortez Allen (CB), Jordan Zumwalt (LB), Steve McLendon (DT), Ross Ventrone (S), Lawrence Timmons (LB), Vince Williams (LB) and Stephon Tuitt (DE).

Although Bruce Gradkowski has returned, his reps didn’t come easy on a toss to receiver Kenzel Doe.  Safety Alden Darby came away with the ball.

Receiver Martavis Bryant and corner Brandon Boykin paired up against each other and both had something to take away from the match up.  Boykin made an inside move on a fade pass from Ben Roethlisberger, intercepting the ball.  Bryant returned the ‘favor’ by grabbing the next pass for a touchdown.

Roethlisberger saw several players step up against him during drills, but made the big play of practice by hitting Antonio Brown in the red zone that caught Antwon Blake out of step.  Brown made a nice over-the-shoulder catch on the fade and tapped both feet in the corner of the end zone making the play even prettier.

For the second day in a row, Alejandro Villanueva swapped from left tackle to the right side as safety Ian Wild worked at inside linebacker – the position he played in college and the CFL.

Tomlin called the day “hot and uncomfortable”, but said Monday was a good example of players being put into tough situations that force them to concentrate and fully execute.  Tomlin told the media the energy and enthusiasm is showing as the team practices hard.

” We got some guys back positionaly, [while we’re] continuing to work guys like Daniel McCullers and Rob Golden and some other guys. Mike Mitchell and others continue to work back from their injuries, and it was just good, general work from an overall standpoint.”

Tomlin stressed that how the team has prepared this week has not been affected by who their next preseason opponent is.  “There are plenty of challenges that are on these fields, and we don’t have to spend a lot of time worrying about the challenge that awaits (the guys) in the stadium.”