Steelers Rookie LB Dupree Thrown Off the Field for Fighting 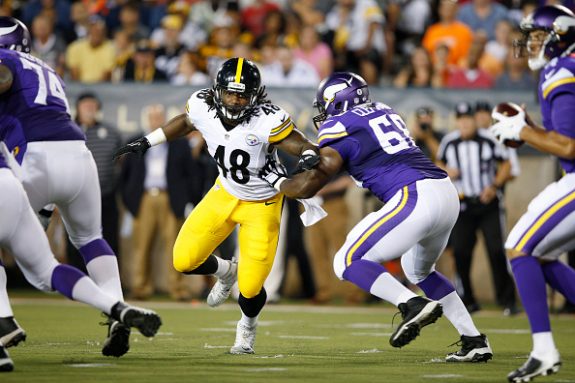 It sounds like Steelers rookie Bud Dupree is already gaining a rep as a fighter, as he was thrown out of practice today for the Black and Gold after fighting with a teammate.

Here’s the quick story on it from PFT:

If the league’s not going to do anything about on-field fighting, the Steelers will.

According to Gerry Dulac of the Pittsburgh Post-Gazette, Steelers coach Mike Tomlin just kicked outside linebacker Bud Dupree off the practice field for fighting with a teammate.

It was the second tussle of the practice for Dupree, who tangled with guard Ramon Foster and wouldn’t let it go.

According to Dulac, the first-rounder was grabbed by veteran defensive end Cam Hayward in an effort to break things up, then escorted off the field by linebacker Lawrence Timmons.

Sounds like Dupree needs to save all that aggression for Sunday’s, as getting into fights with his brothers on the field is by no means a good thing.

Leave it to vets like James Harrison and Timmons to get a hold of this youngster, and sit him down and explain to him the ways of the world.