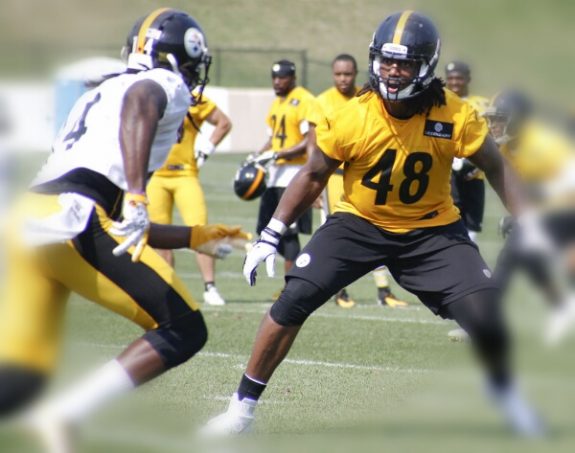 Holy cannoli with extra sauce, stop the press!  Wednesday was sultry in Latrobe and the mood on the field soured a bit, but for the first time in 2015, the Steelers exhibited some real explosiveness at camp.  While the media went nuts over Bud Dupree’s apparent desire to destroy offensive linemen, they were given extra tabloid material when Antonio Brown exited drills in anger.

Every year there is some moment at Saint Vincent that gets players riled up and heated.  While the weather on Wednesday didn’t help, it isn’t unusual for players to enter a scrum as the level of pressure to perform, execute and make a spot on the roster also heats up.

Where are all the folks that wanted more excitement and intensity?  Dupree and Brown provided some, but it sparked an explosive debate over the pair’s attitudes instead of being recognized for what it was.

Whether either of them were wearing a chip on their shoulders or just got frustrated, it wasn’t as big of a deal as some have very publicly made out. Granted, I’d rather see Dupree manhandle opposing offensive linemen, but he’s been criticized heavily for not being aggressive enough.  Being escorted out of practice by your fellow linebackers certainly qualified as a show of aggression.  Perhaps misguided, but camp is winding down and Dupree is a rookie battling for recognition from coaches.

Brown was disturbed and perturbed enough to exit drills for reasons only he and a handful of people there know and understand.  Could he be frustrated due to not being targeted on Wednesday? Sure.  But, he may have been upset with the play of teammates, the use of backup quarterbacks, the way the pads were making him sweat more profusely or just a feeling of trying to push harder and not seeing the end result he wanted.

It’s easy to make a judgment that players who step out of line in practice are simply exhibiting a poor attitude, but it doesn’t necessarily have a thing to do with what the public interprets as “wrong”.  Often, players (you mean they are human?) simply blow up out of frustration, over-exertion and verbal exchanges that don’t go over as oratory successes.

Unless either of them caused serious injury to a fellow teammate, the outbursts are simply an expression of emotion.  Let’s not blow it into a Geno Smith jawbreaking performance just yet.  The team dealt with it internally with teammates stepping in to keep things under control and diffused.  That shows team character and aren’t we really wanting, deep down inside, to see them work through challenges together?

I certainly don’t need to see Steelers players jumping all over each other to understand that they are in a pressure cooker.  Likewise, I hardly find the incidents to be the kind that instantly destroys the overall perseverance and participation that has been put in.

Dupree and Brown will either get past it or let issues simmer.  As professionals, it would serve them best to find a workaround.  As members of the fan club or media, we don’t need to complicate an already tense preparation time with broad generalizations about what we perceived.  After all, we want intensity; practically demand these guys show us they have the guts to hit hard and play hard.  I think we just witnessed a hiccup that can be cured if everyone takes a great big deep breath.

(Sheldon Dean typically writes the Cover One feature, but deferred to Christina for the ‘cooler head’ take, in his opinion).

Cover One: How Much Concern Are The Steelers Hiding
Steelers offensive starters to get more snaps against Packers