Steelers offensive starters to get more snaps against Packers 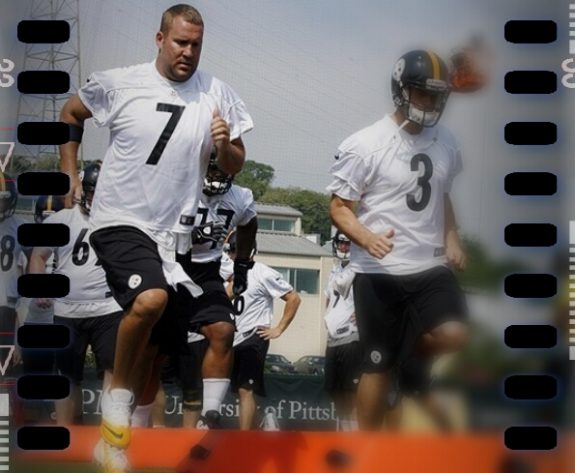 As the Pittsburgh Steelers wind up yet another training camp at Saint Vincent College, they look ahead to their third preseason game on Sunday against the Green Bay Packers.

Steelers fans were excited by the quick action the first-team offense took against the Jacksonville Jaguars.  After scoring almost at will, the starters were hurried off the field.  Hearing that Mike Tomlin plans to allow quarterback Ben Roethlisberger go against Aaron Rodgers of the Packers has already created buzz.

For Roethlisberger, Sunday’s game is about finding out how well the offense can work together, not about snap counts.  When asked about how long he anticipated the starting offense will be on the field, Roethlisberger said, “It’s going to depend on production…I’ll go till [coach Tomlin] says I’m done.  I know I’ll hope that it’s productive however long it is.”

Running back Le’Veon Bell is taking as many opportunities to get reps in during the preseason due to the suspension he faces in the first two regular season games.  This early preparation time has Bell hyped for what is to come.  “I’ve seen just about everything I think I need,” Bell said.  “The way I feel now…I’m only going to continue to get better. I’m excited where I’m at.”

Martavis Bryant and Markus Wheaton have stepped up their efforts, pushing themselves and each other to be as reliable of targets as Antonio Brown in the first receiver spot.  Bryant has been a frequent target for Roethlisberger this week and is expected to have a good showing on Sunday.  Behind Bryant and Wheaton, Darrius Heyward-Bey has come on strong, showing the speed that got him into the league.  With the depth the Steelers have at the position, Heyward-Bey looks ready to step into the slot position if called upon.

The offensive line may have scrummed a bit with Bud Dupree this week, but when all was said and done it resulted in a stronger unit that is better prepared.  Alejandro Villanueva looks ready to truly challenge for a starting spot on the line and the unit has played well together throughout camp.  The fact that they are healthy is not only an indication of their individual dedication to the strength and conditioning programs during the offseason and camp period, but one of wanting to work well to be the power that protects Roethlisberger as he manages the receivers and running backs effectively.

Although Bruce Gradkowski was active, he will not play on Sunday giving Landry Jones more time to improve.  Following the release of Tahj Boyd, the signal was sent that Jones is expected to do what is necessary to guide the offense.