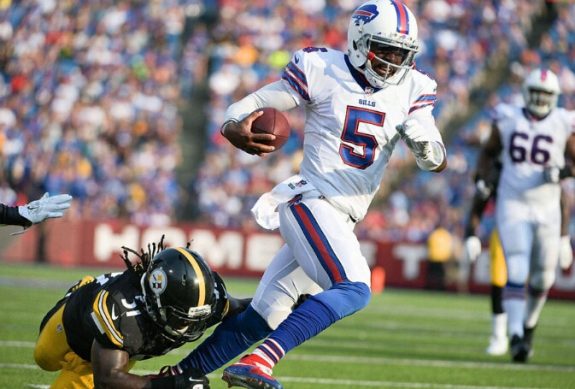 The Pittsburgh Steelers headed into the third week of preseason knowing that the Buffalo Bills have been building a potent offense of their own. With a suspect defense, the Steelers struggled, losing by a score of 43-19.

Quarterback Michael Vick had a decent showing in his Steelers debut. With help from Martavis Bryant, Vick was able to move the offense efficiently.  He still had enough zip in his legs to take off on one play down the sideline.

The real story of the day was that the Steelers played nearly every man they had in their defensive arsenal against the Bills – a Buffalo offense that put in four different quarterbacks, lost several players to injury during the game and did not play their top receivers – and had no real answers.  The Bills were able to throw passes at will, further exposing deficiencies in the Steelers defense that had trouble with the run initially and got caught playing too soft on pass coverage.  Watching Steelers players over-pursue and miss tackles just added more worrisome concerns.

It is no longer acceptable to simply say, ‘it’s preseason’ and buy into the excuse.  The Steelers have just one game left to work out the kinks and after being handed the loss on Saturday, there may not be enough irons to smooth the wrinkles.