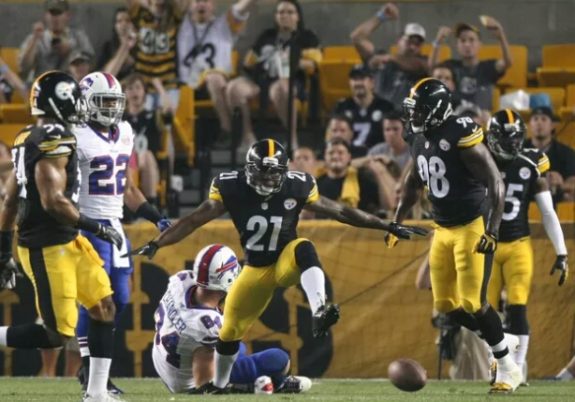 Little went right for the Pittsburgh Steelers on Saturday against the Buffalo Bills.  Coach Mike Tomlin pointed out several concerns, as did players, following the game.

Tomlin: Not the outcome Steelers wanted

Tomlin opened his post-game press conference admitting that even though he typically reserves judgments until after watching game tape, certain issues were evident: slow starts in games, poor execution, a lack of intensity and drive, injuries and overall performance.

“Some of that stuff was quite disturbing; not the type of performance we’re looking for,” Tomlin said.   “After a performance like that, you analyze every element of it; not only from a player’s standpoint, but also from a coach’s standpoint.”

Placekicker Garrett Hartley, who was signed in place of Shaun Suisham due to injury, has a potentially serious hamstring injury to his kicking leg.  That may open the way for punter Jordan Berry to work on kicking field goals per Tomlin.  Berry appeared to have beaten Brad Wing out of the punting position, but may be asked to do double duties.

Bud Dupree was forced out of the game due to a sore foot.

“(He) was above the line today. He’s really been above the line all pre-season. He’s done a nice job getting acclimated to this environment and being the guy we thought he would be when we signed him back in the spring.”

Le’Veon Bell: “We have to continue to move forward.”

When asked about Martavis Bryant’s recent off-field issues and if he got involved in speaking with his teammate, Bell said, “Yes, I did…It’s something he is going to have to overcome just like I had to overcome it.”

On other teammates stepping up: “DeAngelo’s come in and replaced me. The offense isn’t coming to slow down at all. You got Wheaton from the outside. You got AB (Antonio Brown?) on the outside, you got Heyward-Bey on the outside…We got all types of play makers…Heath Miller?, you got guys all over the field who are able to make plays when the opportunity presents it selves so the offense is still going to be clicking.”

Shamarko Thomas on the Steelers defense:

When asked about where the defense struggled, Thomas said, “(The Bills) had a great game plan and they made big plays. You know, big runs, big passes and we just got to get better…We shouldn’t be happy with the results that happened on the field, you know. Even if people were playing just not to get cut we’re still out there playing football and you got to go out there and be a competitor.”

When asked if it is too early to be concerned about the defense:  “No, we’re always concerned. We always have to go in there with the mindset of getting better and this wasn’t a good game for us so we got to get back and work on the small things and get better.”