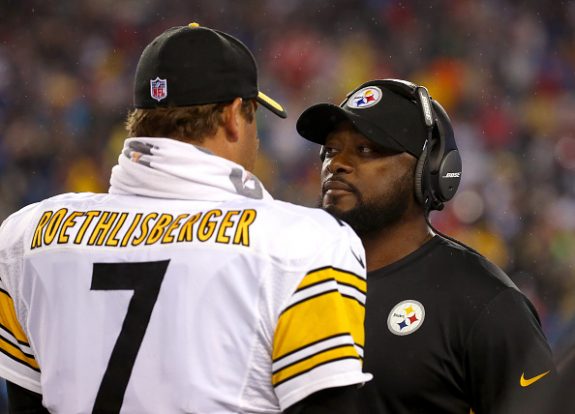 QB- Big Ben had a solid performance against a revamped Patriots Secondary. For the most part he was a solid but made a bad decision to force a long pass that was intercepted along the sideline. He threw a late touchdown with 2 seconds on the clock. He finished the game passing for 351 with a touchdown and a pick.
Grade B
Running back- DeAnglo Willams had a very impressive game in his first appearance as a Steeler. He finished with 127 yards and will Johnson scored the lone rushing touchdown. His first as a pro.
Grade B+
Wide receivers- For the most the wide receivers played well. Antonio Brown was his normal typical self he finished with 133 yards. Markus Wheaton had a few nice catches. One in particular down the right sidelines Heyward Bey had an up and down performance His 43 yard catch should his exceptional speed which he known for but his catch in the end zone where he didn’t keep his feet in the end zone was possibly a game changer.
Grade B
Offense line- The offense line for the most part kept Ben clean and open up some nice holes for Deanglo but at times killed the offense with some penalties. Wallace had a hold on a nice gain by Williams. Gilbert and Beechum each had big penalties.
Grade B-
Defensive line- The defense line main job was to stop the run and for the most part did a good job. They didn’t create much pressure but had a respectable effort.
Grade C
Linebackers- I have a mix feeling about this unit. Ryan Shazier had a great game. He played like a man possessed and was all over the field. Bud Dupree had a sack on Brady but it was confusion on a play in which Rob Gronkowski was passed to the secondary. The Steelers Mix up the unit and we saw several different combinations.
Grade C
Secondary- Rob Gronkowski might be the best tight end and just to not even account for him is no excuse. He was left alone when he lined up at wide and wasn’t even covered. The communication was the biggest issue and on several occasions the unit looked confused and lost. Mike Mitchell made a good play on the strip of Lewis but Will Allen couldn’t come up with the ball. Julian Edelman had a great game out of the slot and at one point Brady completed 19 passes in a row.
Grade F
Special Team- the coverage units did well but no big gainers. The obvious mistakes were the 2 misses that hurt. Hopefully this was just a bad outing and a 1 game thing. I can understand if it was a cold winter day at Heinz field but you have to make those kicks in the summer at Gillette stadium.
Coaching- Mike Tomlin had issues with the headsets and maybe that led to the communication problems. The offense drove up and down the field but couldn’t finish drives and that was the difference. The attempted gadget play on the Antonio Brown pass killed a potential good drive. The defense is a work in progress and hopefully will learn from this performance.
Grade C
The Steelers should be better from this point on. The big scope is that you can’t make certain mistakes against Brady and Belichick. The Patriots are too good and took advantage against mistakes. The Steelers lost by only 7 points without 2 Starters and a young big play receiver. Let’s not lose fact of that point. It’s a long season and they will be better once they get in sync.

Checkdown Audible: Headsets Not Issue In Loss To Pats From Steelers
This Is Just The Tip Of The Iceberg For Alvin Dupree