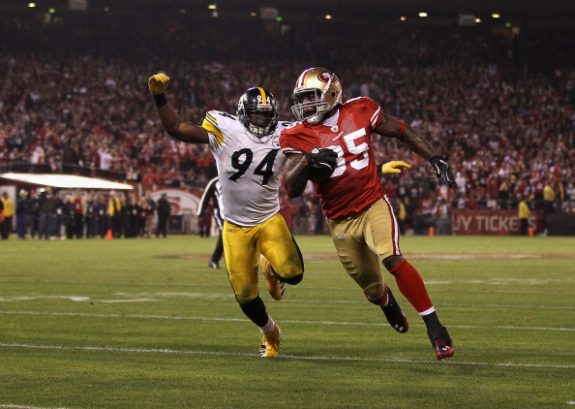 A short week, a west coast team coming in – sounds like the formula for an easy win for the Steelers, right? Not so fast. While it’s easy to think the Steelers should be able to roll over the 49’ers in their home opener at Heinz Field Sunday afternoon, the black and gold better not get too ahead of themselves.

The team needs a win to put the bad taste of the loss to the Pats behind them, and getting a 49ers team that should be a little beat up with a short week should be a winning formula.

Today we take a look at a couple keys for the Steelers to win, as well as give our pick on who will take home the win.

1. Sure Tackling – It looks an awful lot like Jim Tomsula’s game plan in 2015 will be to try and do a weekly ‘ground and pound’ that will revolve around running back Carlos Hyde. In week one the back rushed for a career-high 168 yards with two scores after taking over as the starter with Frank Gore going to Indianapolis. The 49ers finished with 230 yards rushing. They will try to ram it down the Steelers throats, and that means the Steelers need to get ready to gang tackle when Hyde gets the ball, and also get back to the basics when it comes to tackling, not allowing Hyde to break runs when a defender gets a hand on him.

2. Get the Run Game Going Early – Last week the 49’ers inspired defense stuffed Vikings RB Adrian Peterson, and this week with DeAngelo Williams coming off a week one outing in which he ran for 127 yards, the offense needs to get him going again. Peterson had 31 yards on 10 carries, a joke considering the player he is. The Steelers need to learn from this, they have a weapon in Williams, and while Ben will get his yards through the air, let’s not forget about Williams, who played a great game and played with fire in his eyes vs the Pats.

3. Avoid the Big Mistakes – Turnovers will kill you every week, we know that, but at the same time the Steelers have to avoid giving up the ball with mistakes on their side of the field. This Niners defense looked like a new group last week vs the Vikings, and they are going to try and get Big Ben to force a pass or try and get him to give up the ball often. If the Steelers want to walk off Heinz Field 0-2, just lose the turnover battle and give San Fran some short fields to work with. Don’t be a hero, just take what they give you on defense, and things should go just fine.

Prediction – This game on paper plays so much in the Steelers hands it’s scary. That’s why it scares me so much. Colin Kaepernick was 17 of 26 for 165 yards last week, average numbers, but he also can get it done with his feet, and will take off quite a bit when the pocket collapses. Lean on the run game, stop the run, and make sure not to give up a lot of cheap points. If the Steelers can do all that, they will win. They should win. They will win. Steelers 28 49’ers 13