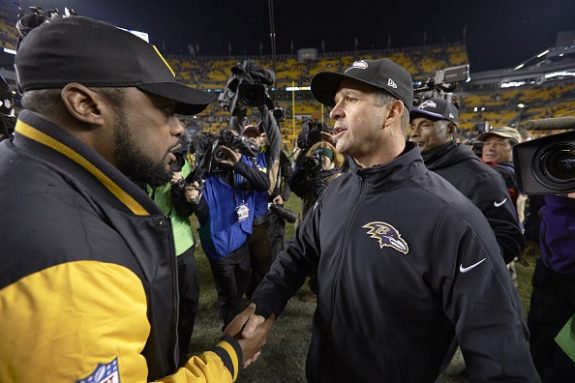 Here we go – again. The Ravens and Steelers have been the best rivalry in the NFL for the past decade, playing in monster games year after year, with playoff births, and even Super Bowl births on the line. Thursday night at Heinz Field the two teams will again do battle, with the Steelers sitting at 2-1 and the Ravens fighting for their football lives at 0-3.

Here’s our three keys for the Big Ben-less Steelers to get a win Thursday night, and what we think will go down with Michael Vick under center for the Steelers against their bitter rivals.

1. Pressure Flacco – In the last five games vs the Steelers, Ravens QB Joe Flacco has completed 117 of 172 (68 pct.) for 1,194 yards with 8 TDs vs. 1 INT for 100.8 rating. He carved up the Steelers secondary in the wild card game a year ago, and while other teams have been able to hold Flacco at bay early in 2015, the Steelers can’t count on that and need to step up their game against him. The easiest way to do that is to collapse the pocket and make sure he can’t go downfield like he likes to do. It also means the secondary needs to make plays as well.

2. Take Advantage of Play Action – Everyone knows that the initial game plan for the Steelers will be to run the ball with Le’Veon Bell and DeAngelo Williams. With that, it should open up the middle of the field for Mike Vick to use quite a bit of play action. Vick will see a steady diet of 8-9 Ravens in the box, and that means he should have single coverage on guys like Antonio Brown and tight end Heath Miller. It will then be on Vick to make the plays and not miss when he’s got guys open downfield.

3. Win the Turnover Battle – Of course you can say this every week, but with a backup QB and a Ravens team looking at 0-4 with a loss, the easiest way to give them a win is to give up the ball. That will not only fall on Vick making sure not to throw picks, but also for Bell and Williams to hang onto the ball. The Ravens can feel the noose around their necks and with another loss it will only get tighter. Time for the Steelers to put the Ravens to rest with a night making plays on defense, forcing turnovers and keeping the ball safe on their end.

Prediction – Yes the playbook will be less with Michael Vick in there against the Ravens, but that doesn’t mean this team can’t generate offense, and with a monster crowd going nuts for Jerome Bettis at halftime with former Coach Bill Cowher in tow, the Steelers should win this game. It’s time for the young Steelers D, who have stepped up the last two weeks against the Niners and Rams, to again make plays, and this time to do it against Joe Flacco and the Ravens. Look for a solid night for the Bell-Williams run game, and don’t worry about Vick, he’ll make enough plays to get it done. Steelers 19 Ravens 10