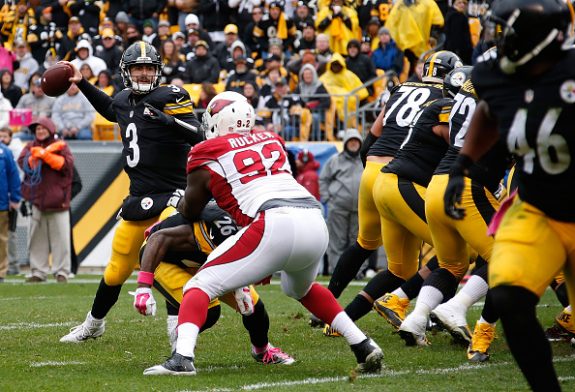 Remember when everyone wanted Landry Jones gone in the preseason after watching in struggle playing quarterback?

What do you think now?

The black and gold looked like a tired crew most of the first half, as they were outgained by halftime 279-59, but trailed it just 10-3 after Arizona couldn’t take advantage of the large difference in yards.

The Steelers started the third quarter with a field goal, but Vick was injured and was replaced by Jones after he injured his hamstring on the first drive of the second half.

Chris Boswell got it to 10-6, when on the next drive the Steelers got a huge turnover on the Cardinals side of the field recovering a fumble.

Jones made some smart throws and Le’Veon Bell got the team in position, and Jones on a third down pass hit Martavis Bryant with a short score to make it a 12-10 game.

The Steelers went for two, and failed on the conversion.

Arizona went 6 plays and 61 yards to get within two to make it a 15-13 game when Chandler Catanzaro hit a 39-yard field goal on the first play of the 4th quarter.

Jones and the Steelers midway through the quarter went on a nice drive, and Boswell nailed a 28-yard field goal to give the Steelers a 18-13 lead with 7:21 to play.

Boswell hit four field goals on the day, as he’s been perfect since signing after the Josh Scobee disaster.

The Cardinals drove from their own 21 to the Steelers 20, but Mike Mitchell came through with a huge end zone pick of Cardinals QB Carson Palmer to keep the Steelers in the lead.

Jones and Bryant then put the game away, as the wide out pulled in a pass, and raced 88 yards to seal the win and give the Steelers a 25-13 lead.

Jones pulled in a gutsy effort in relief of Vick, throwing for 168 yards on 8-of-12 passing with two scores and a QB rating of 149.3. Vick was flat out awful, going 3-for-8 for just six yards passing. He did run for 47 yards on 5 carries.

Bell ran for 88 yards on 24 carries, and the Steelers allowed 469 yards to the Cardinals, but only 13 points while they ended the day with 310 yards.

Palmer threw for 421 yards and a score, but also threw two picks, including the key one in the last minutes in the end zone.

The win puts the Steelers at 4-2 after six weeks, and without Ben Roethlisberger they are 2-1. The will travel to play the Kansas City Chiefs next week.