Cover One: Tomlin Doing What Most Can’t Do 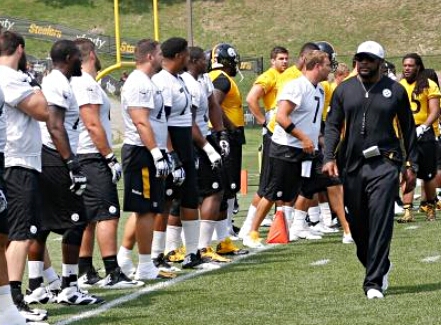 Mike Tomlin has been praised, and criticised heavily, as the Pittsburgh Steelers’ head coach.  Tomlin has had his share of bad draft picks, free agents and assistant coaches.  One area Tomlin has excelled at is getting stellar play from the quarterback position.

Tomlin, as head coach, has won games with quarterbacks Ben Roethlisberger, Charlie Batch and Dennis Dixon. Tomlin has also had backups such as Byron Leftwich and Landry Jones step in in emergency situations and lead the Steelers to victory.

Many times, NFL coaches today cannot produce a top-20 offense with one quarterback at the helm. For most teams, the offense, and eventually the entire team, struggles when the backup is forced to play several games; the Dallas Cowboys are a great example. Tomlin, on three occasions, has won games when his third string quarterback was forced into action – Batch, Leftwich and recently Jones.

This week, it looks as if Jones will start this Sunday at quarterback versus the Kansas City Chiefs. It’s a proven fact that the Chiefs are not a very good team in 2015, but if Jones plays well enough to the put the Steelers in position to win it will put Tomlin in prime position as a coach of the year candidate.

Jones is a pocket passer with a quick release and decent arm strength. Jones is clearly a better fit than Mike Vick because of his pocket presence, but Tomlin faces the enormous challenge of preparing Jones for his first career start in one of the loudest stadiums – Arrowhead.  In the past, Tomlin dealt well with Dixon, who was inexperienced and wasn’t a very accurate passer. Tomlin will likely have guard Ramon Foster help out with pre-snap counts.  Getting Jones ready is something that most head coaches can’t do.

Is Rushing Back Roethlisberger a Mistake for the Steelers?
Hard Count: What is Byron Stingily Ready To Do For Steelers?