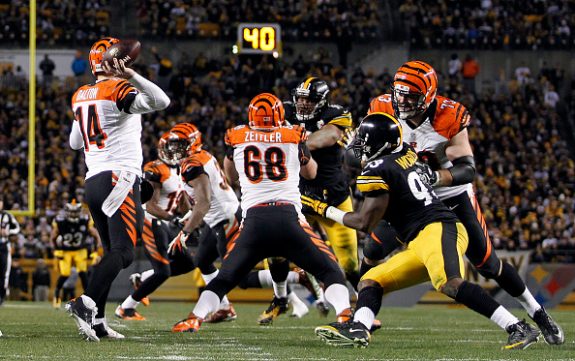 The undefeated Cincinnati Bengals come to Heinz Field for an AFC North showdown with the Steelers tomorrow, and all eyes will be on number seven – Ben Roethlisberger. It will be the first time the Steelers QB has taken the field since his injury a month ago in St.Louis, a day in which many felt that the Steelers captain would be done for the season.

Instead the injury wasn’t as bad as first thought, and after going 2-2 the Steelers get their leader under center back. While it will be on Big Ben to produce, it will also be on a defense to step up after a not so good game a week ago to stop Andy Dalton and the cats who are playing great football.

Today we give three keys, as well as our pick for the game between the Bengals and Steelers in this critical matchup.

1. Ring the Bell – Yes as stated above, all eyes will be on the knee of Big Ben and what he can do, but for the Bengals their eyes should be on Le’Veon Bell, who truly is the key to the Steelers offense. Consider the following, in three games vs the Bengals Bell is averaging 147.3 scrimmage yards per game (262 rush, 180 rec., 442 total) & has 4 total TDs (3 rush, 1 rec.). If he can have that type of game against the good Bengals D, the Steelers will give themselves a great shot at a win. While Ben can’t make mistakes, they also need to make sure to give Bell plenty of touches.

3. Don’t Forget to Involve AB – Antonio Brown last season had a monster game in the AFC North finale vs the Bengals in which he caught a long TD and took back a punt for a score. Brown seems to thrive against AFC North teams, and the Steelers can’t forget to get him involved in the offense now that Roethlisberger is back. In the last seven games vs other AFC North teams Brown has 51 catches for 755 yards and 3 touchdowns. He’s gonna get his QB back tomorrow, and while Bell should get a ton of looks as they ease Ben back into the offense, they also have to find a way to get Brown the ball also.

Prediction – The Bengals haven’t been 6-0 since their Super Bowl season of 1988 when Boomer Esiason had his career year, and they have never been 7-0. I can’t help but think that Ben is going to have struggles out of the gate, as even though it’s not a head injury or like in 2012 when he hurt his rib and the team ended the year losing 5 of 6, including 3 of their last 4 when he returned. I don’t think this team is going to tank like that team did, but I don’t like this matchup for the Steelers. I think it may take an extra week for Ben to work back into the offense, and the Bengals I think take round one of the two AFC North games, as Dalton and the Bengals offense does enough to pull out a close win. Bengals 24 Steelers 14