Can the Steelers Overcome Without Roethlisberger Yet Again? 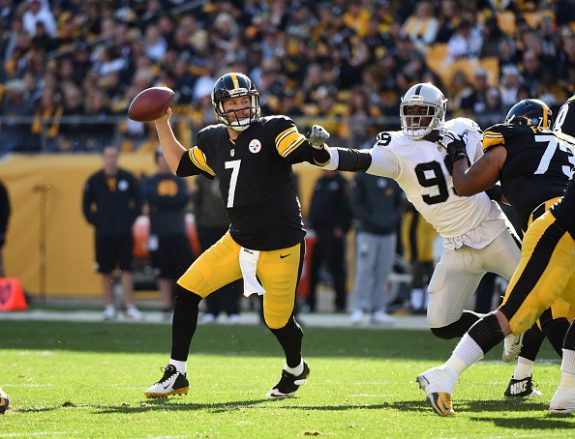 The Steelers wake up today sitting as the NFL’s 6th seeded team in the AFC playoff race with seven games to play, but after already surviving one scare without their franchise QB this season, now it appears they will be without him yet again for who knows how long.

Yes, the early indications seem to indicate that Ben Roethlisberger will be able to get back on his feet and back in the Steelers lineup after their bye week in Seattle – but let’s be honest, do you really want to see him that quickly?

We all had our hearts in our mouths yesterday when the QB couldn’t put any pressure whatsoever on his foot and eventually was carted off and taken to get it checked out outside the stadium.

When word came back that it was a mid-foot sprain, people were relived, but let’s not count on Big Ben being able to yet again be Big Ben when he’s back in the lineup.

Right now the team should prepare for at least 2-3 weeks, meaning 1-2 games with Ben watching from the sideline, and they need to do whatever they can to get Landry Jones ready.

It’s truly amazing to see what this franchise has been able to do with all the injured players, and if you tell those guys in the locker room it’s a lost season with guys not in the lineup, be prepared to protect yourself, as those guys have too much pride to just curl up and not fight.

The defense has its moments of looking like a top 5-10 unit, and then at times they allow drives that make you want to pull your head out. The run game looks dominant at times, and will be leaned upon even more with Le’Veon Bell gone for the season.

This team can beat the Browns at home to get to 6-4 Sunday without Roethlisberger, and should give him three weeks total (at least) to heal the foot and get ready for the final month of the season.

If this team is at 6-5 and has five games left with a even 70 percent Roethlisberger, they can and should still be in a position to be very much in the hunt for a wild card spot in the AFC.

As I’ve said a number of times on twitter, this feels like a cursed season, but it just may still have a silver lining or two left if they can find a way to get their franchise QB somewhat healthy for the last month of the regular season.

Between the Hashmarks: Take A Bow Mr. Williams
Checkdown Audible: Nice to see Antonio Brown back