Roethlisberger Comes In to Save the Day; Steelers Roll Over Browns 30-9 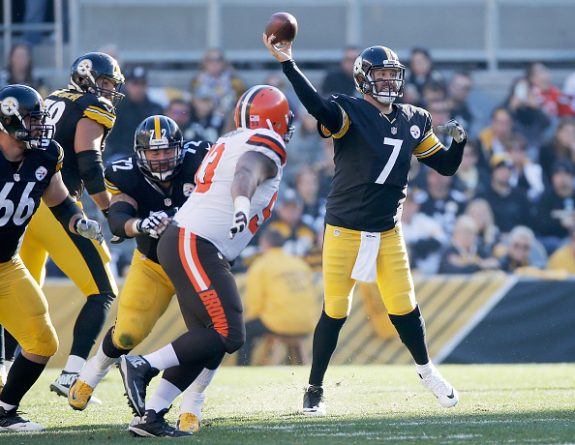 Like a banged up gunslinger coming into the saloon to take back what’s his – Ben Roethlisberger entered Sunday’s game less than 100 percent, but still had more than enough to beat the simply awful Cleveland Browns 30-9 at Heinz Field.

It was an odd game from the start, as people wondered if Landry Jones could do enough to beat the overmatched Browns, and instead he lasted just two series’ after he had his ankle stepped up and had to leave the game.

After a Johnny Manziel fumble recovered by Arthur Moats, Jones from the Browns 12 wasn’t able to get the Steelers in the end zone, and had to settle for three points and a 3-0 Steelers lead.

The Browns tied the game after a Travis Coons 23-yard field goal, and at that point Roethlisberger came into the game to a big ovation from the Heinz Field crowd.

He didn’t disappoint, as he was able to play about as well as anyone could expect, throwing for 379 yards, three touchdowns and a pick in the runway win.

The QB moved well on the foot that he injured last week, and was able to scramble and move up in the pocket enough to fire the ball to his favorite wide outs.

The unexpected part of the game was the Steelers lackluster run game. DeAngelo Williams, who had a big game last week against the Raiders, ran for just 54 yards, but most of the game was held in check by a Browns run D that had allowed over 140 yards per game coming in.

It didn’t matter, as Roethlisberger was deadly against a Browns pass defense that couldn’t stop Antonio Brown or Martavis Bryant. Brown pulled in 10 catches for 139 yards and two scores, and Bryant had a big day, catching six passes for 168 yards and a score.

The Steelers built a 14-3 lead after they scored on a Roethlisberger to Brown scored with 3:32 left in the first half. They basically put the game away when they got the ball back with less than a minute to go in the half, and Ben hit Bryant with a 32-yard score with :32 left in the half to make it 21-3 at halftime.

A short Boswell field goal made it 24-3, and the Browns went on their best offensive drive of the day, but failed to score after having it first and goal from the one. A penalty and sack put them backwards, and then Manziel threw a pick to Mike Mitchell that stopped the drive.

After a Roethlisberger pick off a tipped pass, the Browns finally scored as Manziel hit Gary Barnidge for a 7-yard score to make it 24-9 after a missed extra point.

Brown and the Steelers put the nail in the coffin as he raced 56 yards with 9:56 to go to make it 30-9 after Chris Boswell missed the extra point.

The Steelers leading wide out flipped in the end zone to celebrate the score, putting all the finishing touches on a dominating win that puts the team at 6-4.

The black and gold will get a week off before a huge game against the Seattle Seahawks in two weeks. It gives time for Ben to heal, along with LB James Harrison who missed the game and was inactive.