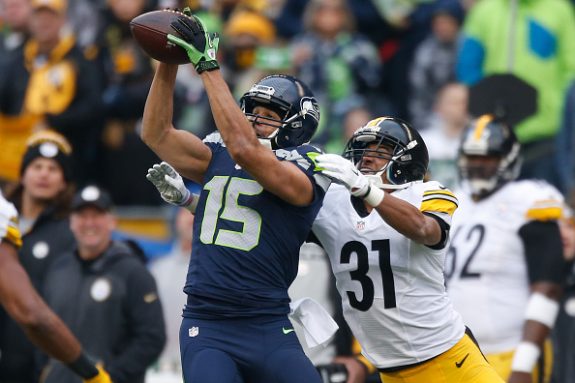 A Steelers defense that at times this season had looked like it was making strides took a huge step the other way Sunday, allowing Seattle QB Russell Wilson to throw for five touchdowns in a hard to swallow 39-30 loss to the Seahawks.

It was a game that the Steelers looked like they had in control at points, but a head-scratching fake on a field goal up 3-0, and a couple huge Ben Roethlisberger picks with some questionable non-calls by the officials spelled doom for the now 6-5 black and gold.

The game came down to a Steelers secondary that was torched all day, especially corner Antwon Blake, who seemed to always been on short end of a big Seahawks play.

Wilson ended the day 21-for-30 for 345 yards and five scores, none bigger than an 80-yard score to Doug Baldwin on a third down play after the Steelers kicked a field goal to close it to 32-30 3:02 left to play.

Baldwin got loose, and outran Blake after a Mike Mitchell missed tackle for the score that killed any hopes that the Steelers had of getting out of Seattle with a win.

The defensive mishaps wasted a big day throwing for Roethlisberger, who went 36-for-55 for 456 yards with a touchdown and two picks. The two picks were bad, but bottom line the offense put up 30 points and it should have been enough to win the game.

The loss jumbles the playoff race in the AFC, as now there are four teams in the conference all at 6-5, the Chiefs, Texans, Jets and now the Steelers.

Baldwin had six catches for 145 yards and three scores. Seattle RB Thomas Rawls had 21 carries for 81 yards and a score.

Markus Wheaton had the biggest game of his career with Antonio Brown shut down most of the day. The third-year WR had 201 yards on 9 catches with a 69-yard score that put the Steelers up 27-26 with 11:51 to play.

Brown had six catches for 51 yards, and Martavis Bryant had five grabs for 69 yards, but had a few huge drops and clearly did not play one of his better games of his young career.

Four turnovers and some questionable calls along with a bad effort from the secondary spelled doom, and now with five weeks left the team likely will have to win no less than four of them to make the postseason.

The team will play the Colts next Sunday night at Heinz Field in the Sunday night 8:30pm game. Indy beat the Buccaneers on Sunday, and they are 6-5 on the year.