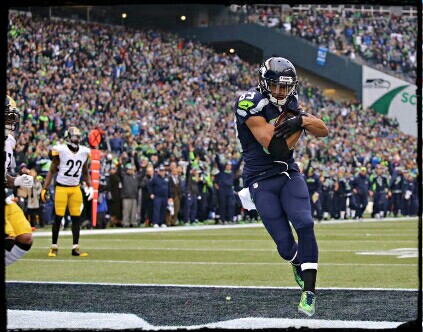 I will preface my post with this statement: prepare to be offended.

Now that that is out of the way, let’s get to the point. The Steelers have never been a team that has seen officials give too many calls in their favor, and against the Seahawks they had plenty of poor calls to deal with. The Steelers shouldn’t need favorable calls to win games. We can sit and complain that Richard Sherman interfered with Antonio Brown 100 times, that the loose ball on the sideline was in Ross Cockrell’s hands and not out of bounds and that jump ball brought in by Martavis Bryant and the Seattle defender should have been incomplete. Moan, moan, moan.

The Steelers have gotten in their own way all season long. This week, it came down to poor decisions and a lack of execution once again by the defensive backs. You can’t really see him in the photo above – but that’s because #41 was never in the right spot. Instead of coverage, he played D like a bumper car. Yes, Antwon Blake. You. The loss isn’t all on Blake, though. A fake field goal after a time out where the Seattle D has time to substitute after seeing who the Steelers send out? Landry Jones has never been the holder so why try to sneak him into the game as one? Terrible.

The Steelers aren’t winning popularity contests this year because they can’t seem to stay positive about themselves long enough to click on a consistent basis. I don’t want them to be popular. I want them to succeed. This team just can’t quite do that when any significance is put on a game. I’m not bailing or turning in my black and golf card, but dang – do they have to throw games away?

Big Defensive Letdown Leads To Tough 39-30 Steelers Loss to Seahawks
Between the Hashmarks: A Prediction That Has Come True For Steelers