Between the Hashmarks: DeAngelo Williams and the return of the run for Steelers 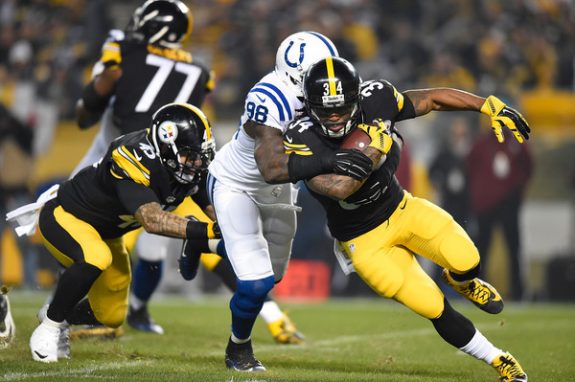 If there’s one thing Todd Haley did right as the Pittsburgh Steelers’ offensive coordinator against the Indianapolis Colts, it was that he returned to the run.  DeAngelo Williams led the way, and as the sixth-leading rusher in the league through week 13, he should have.  I would go so far as to say the Steelers never should have gotten away from using Williams in the first place.

Games this season where the Steelers offense succeeded by giving Williams the ball:

I would give Williams a big nod in a close loss to the New England Patriots in week 1 as well due to the fact that by carrying the ball 21 times for 127 yards, he helped the offense stay in the game.

Between 9/27 and 11/1, the Steelers only gave Williams the ball 22 times in the run game.  The result was that Pittsburgh lost three of those games and were forced to rely heavily on the pass in the three wins.  Only one of those wins was by a nice margin (against the Cardinals on 10/18).  The Steelers once again got away from Williams against Seattle in week 12 – they lost, 30-39.

If you’ve watched football long enough, you know that teams who have a balanced offense (run/pass) generally are the most successful from week to week.  While Williams is not the only running back on the Steelers’ roster, since Le’Veon Bell was injured in week eight after missing the first two games of the season (suspension), the wily veteran has shown he is the true workhorse in the ground game and valuable as a receiver as well.  Williams has 141 carries for 697 yards and six rushing touchdowns this season.

Williams has added 25 receptions on the season for 256 yards (a 10.2 yards per-catch average).  He has had three balls pop loose, but only one was not recovered by himself or a teammate.

If the Steelers are to make a legitimate attempt at beating the AFC North-leading Cincinnati Bengals in week 14, they need to get Williams involved from the start.  Williams has the drive to be a difference-maker in this Steelers offense.  It was clear that the proper mix of run in the win over the Colts forced the Indianapolis defense to change coverage, opening the field for mismatches and bigger passing plays.  Plays that weren’t there in previous weeks.

Williams has to be in the long-term game plan for the rest of the season if the Steelers want to capitalize on every tool in their box on offense.  He’s the best free agent pick up the Steelers have had in 2015.  There’s no reason to waste his talent.