Cover One: Time To Rumble, Round 2 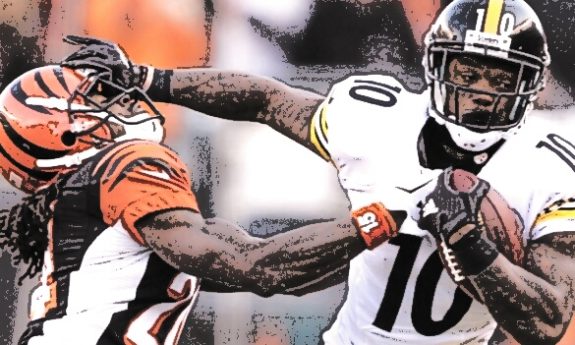 When your team plays a crucial game in the month of December, you know you are doing something right. As the Pittsburgh Steelers face off against the Cincinnati Bengals with playoff seeding guaranteed to be shaken up, the Steelers have momentum, but so do the Bengals.

The Steelers lost the first game (between these two teams in week 8) largely because of turnovers and their inability to capitalize on the turnovers the defense forced.

The injury to star running back Le’Veon Bell didn’t help matters at all.

In Sunday’s game, the Steelers offense is more dangerous than it has been all season. The key player in the eyes of many has been wide receiver Markus Wheaton who has come on strongly. If Wheaton continues his positive play, defenses, including the Bengals will be forced to single cover Antonio Brown and Martavis Bryant which will allow the deep passing game to be a threat on each play.

The Bengals have a very talented defense who knows how to rush the passer consistently. That being said, how efficient the running game is in the first quarter will be key.

Andy Dalton has improved very well in the short passing game. Dalton has elevated himself to where consistent quarterback  pressure must happen to throw Dalton off rhythm.

Tight end Tyler Efiert will be difficult to stop down the middle as it will be up to safety Mike Mitchell to be physical early on.

The Steelers defense can live with A.J. Green catching short passes. Cornerbacks such as Antwon Blake and Brandon Boykin (hopefully) will be given the task of covering Green in single coverage.

The linebackers must contain the power running of Jeremy Hill and the speed of Giovanni Benard. The counter and blast runs and screens pass play will be  called regularly. The presence of James Harrison off the edge brings about the possibility of false starts and holding penalties.

The Steelers probably won’t win the division but this win will be serious momentum heading into the next game vs the Denver Broncos.