What’s Wrong with Roethlisberger? Can He Turn it Around for the Playoffs? 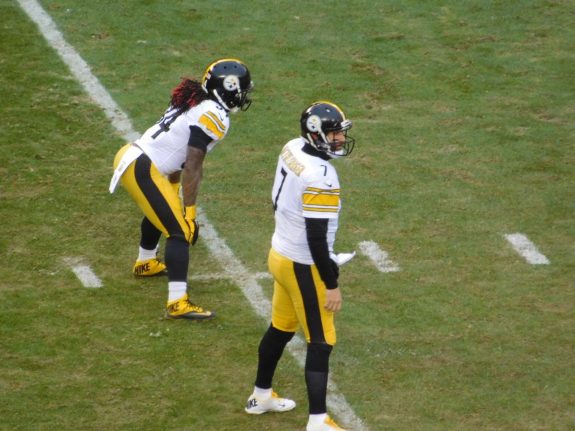 If you have watched the last two weeks of Steelers games against bad AFC North teams, the Ravens and Browns, you may have noticed that franchise quarterback Ben Roethlisberger clearly isn’t himself.

The quarterback doesn’t look comfortable, and has tried to do too much, leading to turnovers that have put the Steelers in bad positions.

The forcing seems to have come when trying to make too much of the perfect pass, throwing the ball into at times double coverage.

Case and point was the awful pick he threw late in the Denver game that gave the Broncos another opportunity which was halted by the Steelers defense.

Since that moment though, Ben hasn’t regained the magic touch he showed earlier in the season in wins over Cleveland (379 yards three TD’s, one pick), Indianapolis (364 yards four TD’s), and Oakland (334 yards two touchdowns, one pick).

Some feel that the Steelers run game, which has had moments of drought even with DeAngelo Williams, has been part of the reason for Rethlisberger trying to do too much.

Bottom line is that in a season which has the Steelers in the dance as of the six teams in the AFC that could possibly be playing in the Super Bowl, if Roethlisberger continues on his current path of two picks per game, the Steelers are going nowhere.

A better run game will help, but also better play from wide outs not named Brown could be a huge key to getting the Steelers deeper into the posteason than just a wild card game against the Bengals.

Right now the biggest head scratcher in the pass game is the play of Martavis Bryant, who didn’t play the whole second half against Cleveland due to a neck injury.

He’s had just two catches for six yards the last two weeks, and it seems has lost confidence after a number of drops.

If he can play and regain any type of form and the big play potential he showed following his suspension, it would be a boost to Ben and the passing game as a whole.

At the end of the day, the Steelers and they need more of good Ben over bad.

He’s got to take better care of the ball, and his six picks the last three weeks is alarming to the point where if he tries to force things and makes those types of mistakes the Steelers won’t be playing past Saturday night.