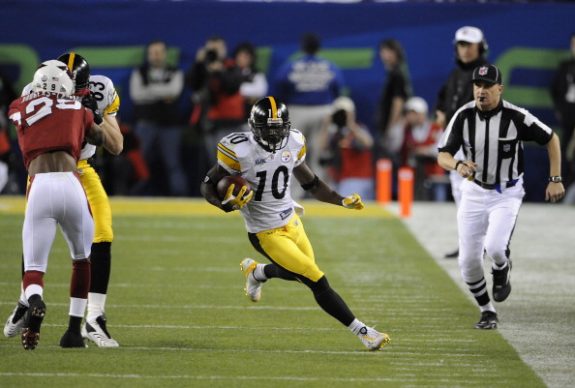 Seven years ago today the Steelers captured their NFL Record 6th Super Bowl Championship in Tampa, Florida as they topped the Arizona Cardinals 27-23.

The game remains to this day as maybe the most memorable in NFL history, as the Steelers drove down the field in the final minutes and ended with Ben Roethlisberger hitting Santonio Holmes with a touchdown to win the game.

Here’s a video from CBS posted today on the game and the dramatic ending:

You didn’t think it would be that easy – did you? Living up to all the hype of possibly the best Super Bowl ever, the Steelers rallied late to overcome a game Cardinals team and win their NFL record 6th Lombardi Trophy with a stunning 27-23 victory at Raymond James Stadium. The game was everything a Super Bowl should be, with lead changes, big plays that changed momentum, and a late game-winning drive from the Steelers that stunned the Cardinals.

It was that drive, an 8-play, 78-yard drive by QB Ben Roethlisberger that ended with a 6-yard touchdown pass to the games MVP Santonio Holmes, that sealed the victory for Pittsburgh. The drive came after the Steelers blew a 20-7 fourth quarter lead, and the Cardinals rallied for 16 points to go up 23-20 with 2:37 left.

The Cardinals go-ahead score was a big play in itself, as Larry Fitzgerald, rather quiet minus a 1-yard touchdown, at that point, broke free on a slant route for a 64-yard score that put the Steelers behind for the first time all day. The mostly pro Steelers crowd seemed stunned as it’s defense seemed a step behind the Cardinals offense for most of the fourth quarter.

Pittsburgh started the game-winning drive at their 12-yard line following a first down hold. Roethlisberger went to work, hitting Holmes for 14 yards, then on third-and-6 he found Holmes again for 13 yards to the 39. Then he nailed Nate Washington with an 11-yard pass to midfield with 1:08 left.

After an incomplete pass, Roethlisberger threw short to the right to Holmes, and the former Ohio State speedster raced 40 yards to the Cardinals six with :48 ticks left on the clock. The team used their last timeout after the play, as the crowd went crazy with the notion the Steelers would get the lead back.

First down brought an incomplete pass, then on second-and-goal, Big Ben moved around in the pocket, and with the Cards in zone coverage threw in the right corner of the end zone for Holmes, who made an amazing catch dragging his feet in bounds with full control of the ball for the game-winning touchdown with :42 seconds left.

After a look from the ref, the call stood, and the Steelers took the lead. Arizona had one last shot, and they got two receptions to the Steelers 44 with :15 left. On 1st-and-10 from the 44, Warner scrambled, and LaMarr Woodley got to him, and ball came out as Brett Keisel fell on it to clinch the win with :05 left.

The game could have been a runaway, as the Steelers jumped out 10-0 after dominating the first quarter, scoring on their first two drives. Arizona came back with a Warner to Ben Patrick score to make it 10-7 with 5:27 left in the first half. They had a shot to take the lead, as Warner got them to the Steelers one with :18 left in the half. Warner through, looking for Anquan Boldin, had his pass intercepted, and the NFL Defensive Player of the Year, James Harrison, grabbed the pass, and after an amazing run, raced to the end zone for a 100-yard return to make it 17-7 at the half.

Arizona then saw the Steelers stop their offense again, and Pittsburgh went almost 8 minutes and drove to the Cardinals three, but couldn’t pound it in, and had to settle for a Jeff Reed chip shot field goal of 21 yards to make it 20-7 with 2:16 left in the third quarter. Arizona then started their comeback, complete with the big play to Fitzgerald that gave them the lead with 2:37 left.

Here’s a pair of videos we took in the Locker Room after the win: