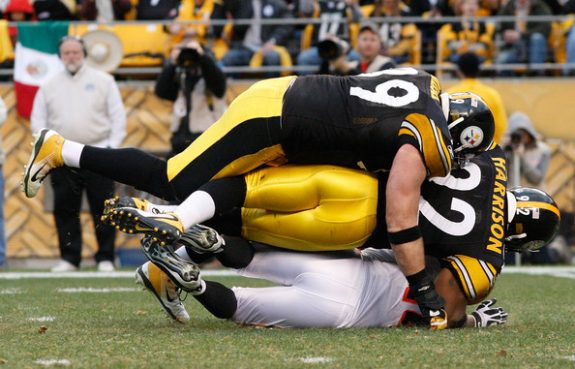 Last year was another productive one for Steelers veteran linebacker James Harrison, and from all indications he will be back playing linebacker again for the team in 2016.

Harrison’s agent, Bill Parise, told Jeremy Fowler of ESPN that Harrison is set on coming back and hoping to wrap up his wild NFL career with another NFL title.

“He’s under contract for one more year,” Parise told Fowler. “We plan to honor that.”

Harrison still has one-year remaining on a a two-year extension he signed before the 2015 season. This season he’s set to make $1.25 million in base salary.

Steelers GM Kevin Colbert said today he also is expecting that Harrison will be back in 2016.

Colbert anticipating Harrison will return for a 14th season

The linebacker in 2015 put up 40 tackles, five sacks, two forced fumbles and one interception. He played in about 50 percent of the defensive snaps, but was still effective for the black and gold, and he should come back for another season the way he played in 2015.

FA CB Brandon Boykin Open to a Return to the Steelers; Will They Bring Him Back?
Tight End Heath Miller Announces Retirement From Steelers After 11 Seasons