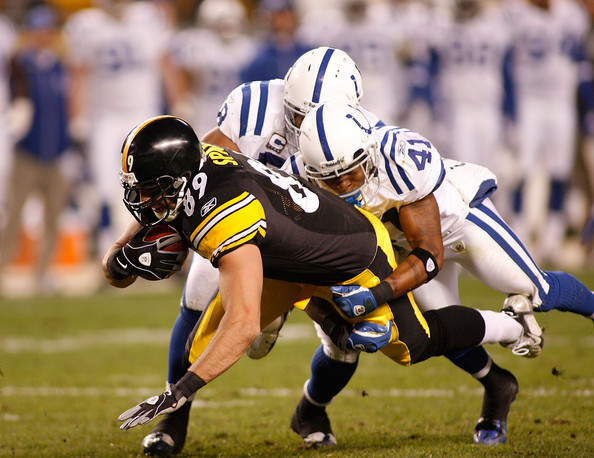 The Pittsburgh Steelers have been forced to alter their plans after Matt Spaeth’s injury saw the veteran released by the franchise, with undrafted rookie Mandel Dixon handed a chance to step into offensive line in his place. Spaeth’s departure was a blow to the Steelers, with the 32-year old leaving the franchise he joined in the third round of the 2007 NFL Draft after making 123 regular season appearances. Having returned to Pittsburgh for his second spell after two seasons with the Chicago Bears, Spaeth’s ongoing knee issues forced him under the knife in the summer and now looks set to keep the veteran sidelined for a significant spell.

A key part of Pittsburgh’s Super Bowl XLIII championship team, the tight end recorded 55 receptions for 420 yards and 10 touchdowns. Having failed a physical during the offseason, the decision was taken to release Spaeth, forcing the franchise into the market. With Heath Miller retiring at the end of last season, there was a gap on the roster that needed filling. While the Steelers still have some work to do before the start of the season, plenty think they have a strong chance in 2016, with the Bet365 NFL betting odds currently pricing Pittsburgh at 17/4 to top the AFC.

While some Steelers’ fans felt that someone should have been brought in earlier, Pittsburgh have moved to add former University of Tulsa star Mandel Dixon to their ranks. During his two seasons in Tulsa, having transferred from Pittsburg State, Dixon established himself as a crucial part of the team’s offense, helping TU average over 500 yards a game before going undrafted earlier this year. Despite spending time with the Dallas Cowboys rookie minicamp, Dixon found himself searching for a place on an NFL roster, with the Steelers’ need for cover coming at just the right time for the youngster.

The Dallas native brings a very decent physical presence to Pittsburgh, coming in at six-foot-two and 231 pounds, capable of playing in a variety of positions across the offensive line. As it stand, Dixon could find himself given a fair amount of game time during preseason. With Spaeth released and Miller retired, the only tight end from last year’s roster that will be returning to training this summer will be Jess James, a fifth-round draft pick last year, and Dixon will have a good chance of keeping his place on the roster if he can impress during the next few months.

Dixon will be competing with fellow new arrivals Ladarius Green and David Johnson, who both joined Pittsburgh during the offseason, as well as Xavier Grimble and Paul Lang. With a couple of months left before preparations for the new season really step up, the Steelers will know there is still plenty of work to be done if this team is really going to be able to compete for the Super Bowl in 2016. It’s been a few years since Pittsburgh started a season believing they could go all the way, but that might change next year with the addition of a couple of new faces.