Three Bengals to Watch in the Steelers Battle Sunday with Cincinnati 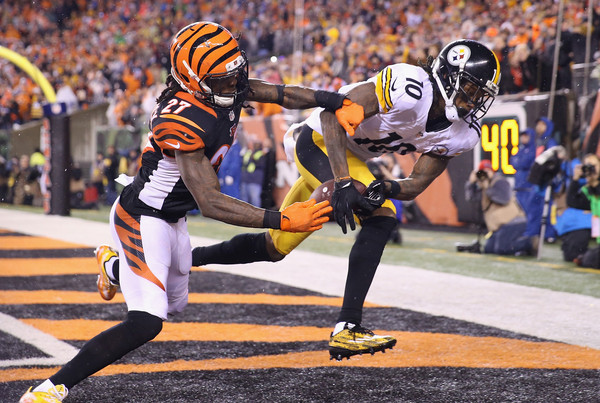 There’s not much that hasn’t already been said about the ongoing war between the Bengals and Steelers, as it’s quickly becoming the best rivalry in the NFL, overtaking the Steelers and Ravens.

Last season the two teams played in three memorable games, with the Bengals winning in Pittsburgh, but the Steelers winning on the road in Cincy, and then in one a game that no Steeler fan will ever soon forget, they bested Cincy in a wild card game in the Jungle.

Both teams in 2016 have Super Bowl dreams, and both are 1-0 after opening weekend wins, the Bengals over the Jets, and the Steelers Monday over the Redskins.

Today we examine the Bengals, and give you three players to keep a close eye on when it comes to the matchup Sunday with the black and gold.

Last week against the Jets, Kirtkpatrick, who loves to be the brunt of jokes from Bengals fans, saved the team by stopping two potential touchdowns in the close win over the Jets. This week his task becomes even tougher, as he draws Antonio Brown, who last week made the Redskins new look secondary look silly in grabbing two scores in the Steelers win. Kirkpatrick has been talking all week about keeping emotions under control. “Every time we play those guys certain things go out of hand, but it’s all about how we respond to it this year,” Kirkpatrick said. “I don’t know how we’re going to respond because the game hasn’t happened yet, but we’ve prepared to respond in the most professional way as possible.” Last season Brown had just six grabs for 47 yards and a score in the Steelers 16-10 loss to the Bengals. The Bengals will look for a repeat of that Sunday.

The Bengals 34-year-old tackle is in his 11th season, and is a staple on the Bengals offensive line. at 6-7, 330 pounds, he’s a huge part of the line and a player the Steelers will look to attack playing the left tackle position. The Bengals didn’t have much of a run game a week ago, and the Steelers did a solid job stopping Mike Jones and any sort of run attack for the Redskins, and will look to do the same against the Bengals Sunday, making them one-dimensional. A good game out of Whitworth will make it that much tougher to force Andy Dalton to drop back just about every play.

This former Panthers and Patriots wide out is taking the spot of Marvin Jones, who left the Bengals for richer pastures in Detroit. LaFell will get plenty of 1-on-1 coverage with a lot of help being given to making sure A.J. Green doesn’t have a huge day. Sunday he had a 49-yard grab against the Jets, and overall pulled in four catches for 91 yards. With the amount Dalton is expected to throw, LaFell will get a number of chances to make plays, and the Steelers corners will have to account for the 29-year-old who could wind up with a big day if he gets the chance.