Are the Steelers Rushing Ben Roethlisberger Back Too Quickly? 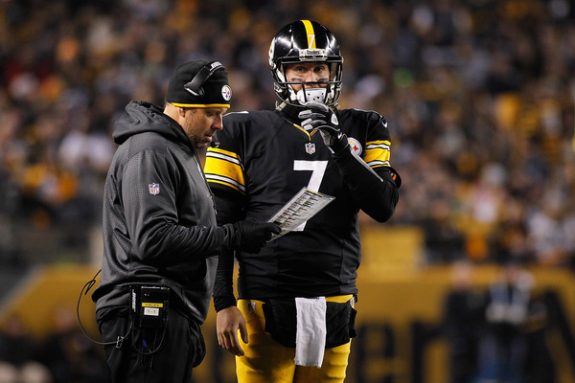 All signs seem to be pointing to Steelers quarterback Ben Roethlisberger taking the field Sunday in Baltimore against the Ravens in a game that could even up the AFC North and drop the Steelers to 4-4 with their third straight loss if they can’t get the job done.

While Ben coming back so quickly off his latest knee surgery is a good thing, there’s also has to be some fear for fans that maybe the QB is rushing back too soon.

By the time Sunday rolls around, Ben will be just 20 days removed from surgery to repair a torn meniscus in his left knee.

Even his teammates felt the QB looked good this past week in practice. “I thought he looked pretty good,” guard Ramon Foster said. “He was throwing the way he normally does, but that doesn’t say how his knee feels.”

The concern about Ben rushing back comes from the simple fact that history has proven that the QB doesn’t play all that well in his first game back off injury.

Take last season when he went down early in the season against the Rams, and missed a couple of games.

When he returned against the Bengals after missing four games, he clearly didn’t have his best effort, going 28-for-45 for 262 yards with a touchdown and three picks in a 16-10 loss.

It’s a fine line to bring a player back too soon, and the Steelers training staff has to be trusted to know what they are doing in terms of Ben’s knee.

It’s also a scary thought to think that if they are rushing him back that he could go down again against a team on the road that in the past has been known to take some pretty hard shots against the franchise quarterback.

No one will know the answer until Ben takes the field and has to run out of the pocket, or takes a sack and that knee may be bent in a not so nice way.

Here’s to hoping that the O-line steps up and plays their best game of 2016, and the run game also gets off and has a big game as well.

Otherwise, it could be a long day for the Steelers as they look to break their two-game losing streak.