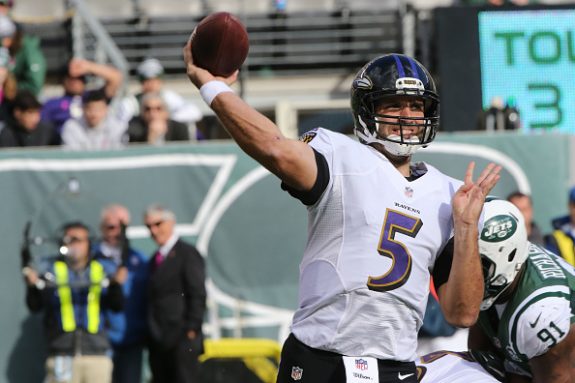 It’s forever been called the best rivalry in the NFL, and Sunday in Baltimore it’s yet another chapter as the Steelers travel to Baltimore to take on the Ravens, a game that has quite a few storylines for both teams.

This doesn’t quite have the same feel as Steelers-Ravens games in the past for some odd reason. The Steelers have stumbled to two straight losses, and will try to work back in their franchise quarterback in Ben Roethlisberger just 20 days after he had surgery on his left knee.

The Steelers are still atop the division at 4-3, but a loss to the Ravens and things will for sure tighten up. Baltimore sits at 3-4, but don’t come close to looking like contenders like they have in the past.

They started 3-0, but since a week three win over the Jaguars, have dropped four in a row, losing to the Raiders, Redskins, Giants and Jets.

So can the Steelers keep the Ravens on their slide, or is this a game where the Ravens will recover and get back in the race in the AFC?

Here’s three keys along with our pick for the game.

1. Is Ben Roethlisberger Anywhere Near Ready?

Usually Ben Roethlisberger coming off an injury spells bad news, as he usually has issues coming off injuries and that first game back he’s almost rusty. Ben also seems to have issues on the road, where his QB rating is just 88.3, as compared to 111.5 at home. At home he’s thrown for 51 touchdowns and 13 picks over the last two seasons, while on the road he and the team are just 8-8, throwing 18 touchdowns and 18 interceptions. Coming off the injury and knowing that the Ravens are coming for him doesn’t seem to bode well, and he’d better get a big game from his offensive line and running backs to make sure he stays upright.

The last two losses the Steelers haven’t been able to stop the run against the Dolphins and Patriots, and this week they have a shot to get the run defense back to form against Baltimore. The numbers don’t lie, the Ravens are 26th in the NFL at 86.2 rushing yards per game and 25th at 3.8 yards per carry. The player that will try to get the Ravens run game going is cast off Terrance West, who has put up 4.4 yards per carry, but still can’t seem to get that part of the Baltimore offense moving. Right now the Steelers are ranked 27th in the league, allowing 4.7 ypc allowed, and in four wins they’ve allowed just 65 yards per game. Stop the run, good things happen.

Running back Le’Veon Bell has been outstanding since returning from his three-game suspension, leading the league with 147.2 yards from scrimmage per game, and he’ll need that type of effort against the Ravens. Don’t be stunned to see the offensive gameplan clearly centered on getting Bell the ball a lot. The Ravens have stopped the run all season, ranked third in the NFL allowing just 81.9 yards per game. Of course they haven’t played against Bell, and Ben and OC Todd Haley are going to do what they can to make sure he’s getting the ball either on handoffs or even on pass plays. Let’s see what creative ways the Steelers use to get Bell the ball, and if it pays off with a win.

Prediction – This is a very tough came to call, with a returning Ben and a Ravens team on the ropes, there’s a lot of questions on the state of both these teams. One thing to consider is that in the last 16 regular-season meetings between the teams, 13 have been decided by four points or fewer, meaning that just about all of these games are close and come down to penalties, mistakes and turnovers. Last season the Steelers dropped two bad games to the Ravens, including the game late in the season to the Ravens that almost cost the Steelers a playoff spot. They have to make Joe Flacco uncomfortable and also find a way on offense to score at least 14-20 points. Going to be tough, but for some reason I think the Steelers rise up out of this two-game funk and get back on track. Pittsburgh 17 Baltimore 14

Are the Steelers Rushing Ben Roethlisberger Back Too Quickly?
Steelers Fall in Baltimore; Fall to 4-4 in 21-14 Beatdown by Ravens