Flashback: 2011 Season Opens With a Steelers Beatdown by the Ravens in Baltimore 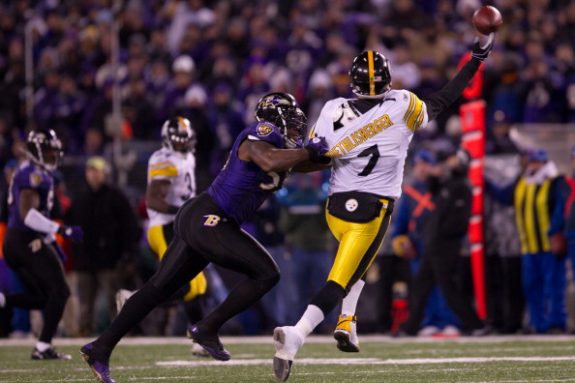 Opening Day 2011 was a day that Steeler fans everywhere would rather forget. The black and gold, coming off a February loss that year in Super Bowl XLV against the Green Bay Packers, opened the season on the road against their biggest rivals, the Baltimore Ravens.

It was a game that the Ravens had circled the moment the schedule was announced, as the Steelers beat the Ravens in the Divisional round of the playoffs in the 2010 season after Antonio Brown’s circus catch late that led to a game-winning touchdown.

They exercised their demons against the Steelers, slamming them in every fashion, 35-7.

With another road game against the Ravens on Sunday, today we take a glance back, as painful as that may be, as that opening day disaster in Baltimore.

Here’s a part of our game story from that afternoon filled with turnovers as well as pain all across the board.

Other than that, not much good could be said from a Steelers standpoint on Sunday, as the Black and Gold’s 8-game opener streak was demolished in embarrassing fashion, losing to the rival Ravens 35-7.

How bad was it? The Steelers trailed 21-7 at the half, and got the ball to start the third quarter. They fumbled on the first play, and the Ravens quickly scored to make it 27-7. Then to put salt in the wound, the Ravens went for two and got it to make it 29-7.

On the next Steelers play, QB Ben Roethlisberger was picked on a tipped pass by Ray Lewis. It wasn’t shocking to see the Steelers turn the ball over, they did it 7 times on the day.

Baltimore’s beating of the Steelers was as complete as any team had beaten the Black and Gold in a long time. Ray Rice ran for 107 yards on 19 carries, (5.6 per carry), and Joe Flacco had plenty of time all day to throw, hitting for 17-for-29 for 224 yards and three TD’s with no picks.

The defense, out of position it seemed like all day, never got a sack on Flacco, and couldn’t stop Rice, who ran all over them for a total of 149 yards and two touchdowns.

Read more of the story HERE