First Half Thoughts on the Steelers 15-13 Lead Over Dallas 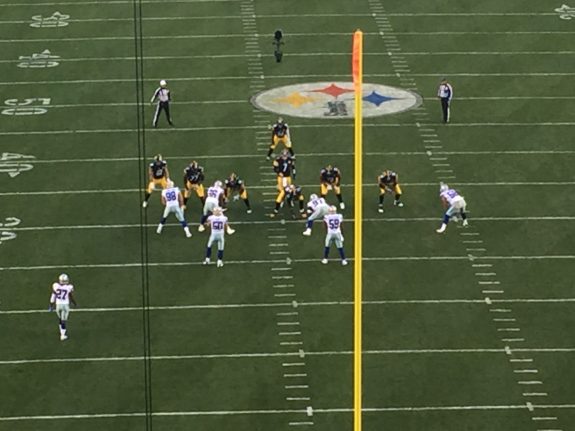 The Steelers have the lead at the half 15-13 over the Cowboys after some big plays and a big early lead.

Here’s some first half thoughts as the Steelers look to close out the Cowboys and get to 5-4.

The Steelers had it all going their way late in the first quarter up 12-3 and the Cowboys pinned deep, and instead of going for the kill yet again gave up a huge play on defense, as Dak Prescott hit Ezekiel Elliott with a simple screen, and 83 yards later it was 12-10. A play the team should have seen coming – but like last week against the Ravens, they were helpless to stop it.

It was good to see Ben Roethlisberger and this offense moving in the right direction for a big part of the first half. The team early in the game got the key turnover and caught the Cowboys off guard, but let’s hope the two-point misses and the inability to convert at the end of the first half doesn’t come back to haunt them in the final 30 minutes.

The Cowboys clearly took some tough shots from the Steelers D in the first half, and it felt like they started hearing footsteps by the end of the half. The D did their job minus the bad play on Elliott that resulted in the only Cowboys TD – and again they will need more of the same in the final two quarters.