Flashback Friday: Eight Turnovers Doom Steelers in Cleveland in 20-14 Loss Back in 2012 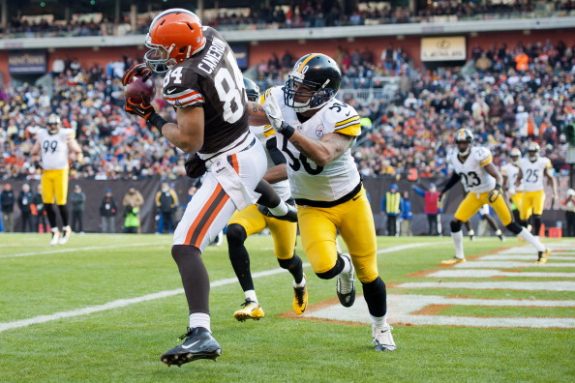 The Steelers will try to break their four-game losing streak this Sunday in Cleveland, but as we look forward to them hopefully getting on track, today we look back to their six-point loss back in 2012, a game where Charlie Batch was playing for an injured Ben Roethlisberger, and the team decided to give the Browns no less than eight turnovers in the setback.

Here’s our game story from November 25th 2012 – a day in Cleveland where the Steelers basically gave a game away.

You can put the blame wherever you want, but the bottom line in the NFL is your not going to win when you give the ball away eight times.

It was first time since a cold Thursday night in 2009 that the Steelers fell to the Browns, and this time it hurt even worse since they had ample shots to win the game.

The team took a 14-13 lead into the locker room on a pinball run by Chris Rainey with one second left in the half gave the team a one-point lead.

In the second half, a turnover at the Steelers 31 opened the door for the Browns, and RB Trent Richardson gave the Browns a lead they wouldn’t lose with a 15-yard TD run to make it 20-14.

Of the 14 Steelers possessions, half of them ended with turnovers, three interceptions by Steelers 3rd string QB Charlie Batch, and four fumbles, one each, by four different Steelers running backs.

For the Rest of the Game Story – Click HERE

With The New Season Of NFL Underway, Where Will The Steelers Finish?
Best Steelers Performances Of 2016-17 So Far