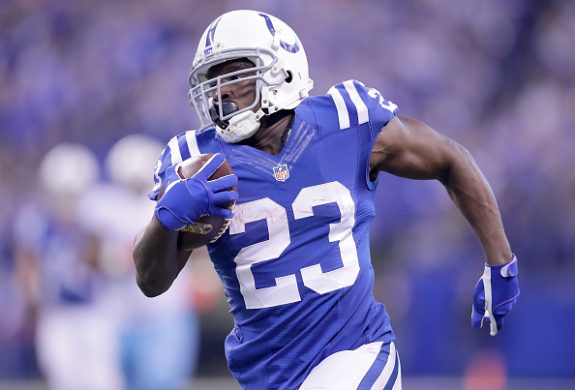 The Steelers are holiday warriors in 2016, as the team is set to play on all three major holidays this season – Thanksgiving, Christmas Day and New Year’s Day.

Test number one will come on Turkey Day, as the black and gold will take on a 5-5 Indianapolis Colts team that is a game behind the Texans for first in the AFC South, but this week were dealt a huge blow with franchise quarterback Andrew Luck being shelved this week due to a concussion.

Luck is Indy’s best player, and the betting odds shifted dramatically when the quarterback was put in concussion protocol, to the point where the Steelers are now 9-point favorites.

But, let’s not start counting on a ‘W’ for the black and gold just yet, as there’s work to be done, and today we give you three keys to the teams’ sixth win of the year, as well as our final prediction for Thursday’s battle in Lucas Oil Stadium.

The Colts biggest offensive threat on Thursday is former 49’ers running back Frank Gore, who this season has rushed for 642 yards and four scores, and has put up 3.9 yards per carry, which is better than last season when he averaged 3.7 yards per rush. Gore at 33 has shown he still has some gas in the tank, but if the Steelers want to force unknown quarterback Scott Tolzien into forcing plays and trying to make things happen on his own, it has to start with making sure Gore doesn’t have much room to run. Last week against the Browns, the Steelers rush defense held Cleveland to 33 yards on 13 carries, with 13 of those 33 yards going to the Browns two quarterbacks. If the Steelers can hold Gore down, their chances of dominating the Colts offense will rise greatly.

2. Keep It All In Front of You

Let’s face it, we have no idea what Scott Tolzien can do, but from reading the scouting reports it looks like this is a guy who is known in NFL circles as a ‘game manager’ and doesn’t have the best arm in the world. That means the deep ball to wide outs Donte Moncrief and T.Y. Hilton will probably be out the window, but that doesn’t mean the Steelers can just give them room to run once they make grabs. The defense has to tackle, and keep everything in front of them. If the Colts want to win, a couple big plays has to be in the cards for them, and Moncrief and Hilton can make guys miss with the ball, which is why the Steelers can’t allow that to happen.

Last week Le’Von Bell saw the ball all day long in the Steelers 24-9 win over the Browns, as it seemed on just about every play he was either running it, or making a play out of the backfield catching the ball. The Colts are 24th in the NFL against the rush, allowing 113.1 yards per game, and the way Bell has got into his groove with the line last week, he should be in for another big week against the Colts. Look for Ben Roethlisberger to take more shots this week since weather in the Dome won’t be a factor, but Bell, who last week had 28 carries and 9 catches, should be the feature act on an offense that last week had four series’ of 10 or more plays, a recipe for winning football, and one the Steelers should try and duplicate Thursday.

Prediction – The mental aspect of this game is probably to me the most dangerous part, being on the road again just four days after a win the team badly needed to get back into the AFC North race, now they have to put all that aside and play a Colts team that is totally deflated knowing they don’t have Andrew Luck. I don’t think Scott Tolzien will be much of a factor for Indy, but then against the Steelers once made Mike Glennon of the Bucs look good – and that was at home. If the team can again get to the quarterback a few times, something they should be able to do since Tolzien isn’t much of a runner, and can play their game on offense like everyone knows they can, it’s hard to see them falling asleep from too much turkey not to get out of Indy with a win, their first Thanksgiving win since beating the Chicago Cardinals 28-17 in 1950. Pittsburgh 29 Indianapolis 10