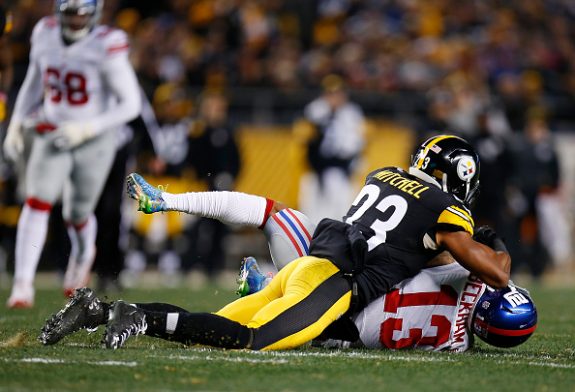 In a game that gave Steelers fans a little more of a barometer of where the team is at, the black and gold laid the wood on a New York Giants team that came into Heinz Field on a six-game winning streak, winning in solid fashion 24-14.

Pittsburgh with the win stays even with the Baltimore Ravens at 7-5 in the AFC North, and all signs seem to be pointing to the Christmas Day showdown at Heinz Field as the game that will decide the division.

The Steelers defense was the MVP on the day, holding the Giants to 234 yards, and keeping Eli Manning in check to the tune of 24-for-39 for 195 yards with two touchdowns and two picks.

Lawrence Timmons snagged a pass towards the end zone, and raced 58 yards to eventually set up a Ben Roethlisberger to Antonio Brown touchdown from 22 yards out with 7:10 to play in the first half to make it 11-0.

The other pick came on a fourth down play when Manning drove the Giants from their 47 to the Steelers 35, and he was looking near the goal line for Sterling Shepard, but Sean Davis picked it off ending another drive with the Steelers up 21-7.

After a Steelers punt the Giants had a last chance to make it a game, as they went from the 50 to the Steelers 24, but on fourth down the drive was snuffed out on a sack by Ricardo Matthews to wrap up the win.

Roethlisberger was 24-for-36 for 289 yards with two touchdowns and one interception. Le’Veon Bell again dominated the run game, rushing 29 times for 118 yards.

The passing game was led by new tight end Ladarius Green, who Ben went to often. He caught 6 passes for 110 yards and a touchdown which made it 21-7 after the Giants drew within 14-7 in the third quarter on a Rashard Jennings touchdown on a screen pass.

New York did little in the run game, as the Steelers defense held them to 56 yards on 14 carries, and Manning struggled as the Steelers D came down hard on him most of the afternoon.

With a quality win under their belt, the Steelers will travel to Buffalo next week to take on the Bills, a team that fell to 6-6 with a loss to the Raiders in Oakland Sunday.