Dolphins To Be Without QB Ryan Tannehill Sunday; Steelers to Face Matt Moore in Playoff Game 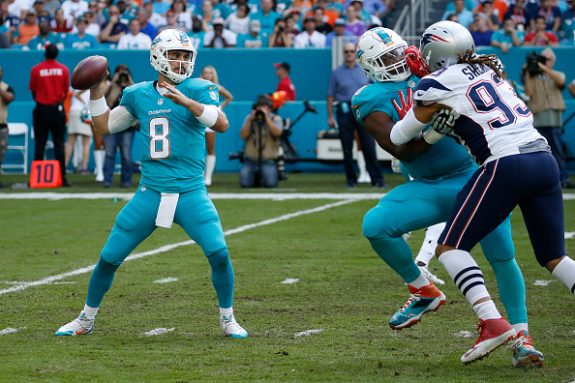 The Steelers game plan for the Dolphins on Sunday got a little more clear on Thursday, as Adam Schefter of ESPN tweeted out that the Fins will be going with backup Matt Moore at quarterback due to regular starter Ryan Tannehill not being ready to go from injury.

Dolphins QB Ryan Tannehill will not play Sunday as has been expected, per league source.

Tannehill was trying to make it back for the playoff game after suffering sprained ligaments in his left knee in a home win against the Arizona Cardinals December 11th.

It was reported a few days back that he was going to try and practice this week with the hopes of playing against the black and gold in the wild card game, but it appears he didn’t progress enough to be able to give it a go on Sunday.

The 32-year-old Moore has thrown for eight touchdowns and three picks in his three starts with the Dolphins since the Tannehill injury, but has not thrown for over 240 yards in any of his starts thus far.

Look for the Fins to lean a ton on running back Jay Ajayi, who last time around against the Steelers rushed for over 200 yards in the 30-15 win in Miami in October.