As Usual, Steelers Slammed by Brady and Patriots When Season on the Line in 36-17 AFC Title Game Defeat 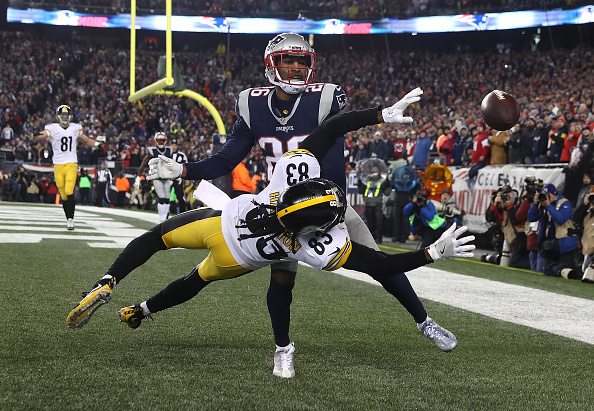 Sunday’s AFC Title Game between the Steelers and Patriots played like a broken record to most of the matchups between these two AFC foes, with Tom Brady picking apart a Steelers zone defense, and as usual a player from the Patriots making the most of an opportunity.

The end result is the end for the 2016 Steelers, a bitter 36-17 loss that really wasn’t even that close considering the black and gold allowed 19 second half points while scoring just eight after trailing 17-9 at halftime.

The Steelers, as they usually do against the Patriots, made a ton of mistakes, from missing tackles and coverage on an afterthought of a wide receiver named Chris Hogan, to not being able to score a touchdown from the one-foot line in the second quarter trailing 17-6.

Receivers dropped a number of passes, the team lost it’s biggest playoff playmaker on offense in Le’Veon Bell to an injured groin, and again the defense never had any answers for Brady despite allowing just 57 yards on the ground.

In the end, the Steelers played like the Cowboys of the 1960’s trying to beat the Packers, it’s been a one-sided rivalry that always looks like the Steelers are a step behind in.

Brady, per usual, was stellar against the black and gold, picking apart a zone defense that had issues all night in making sure players were covered, and even when they were they missed a number of tackles that allowed for yardage after the catch.

The Pats future Hall of Fame QB was 32-for-42 for 384 yards with three touchdowns, and a QB rating of 127.5 Without Bell, the Steelers offense just seemed two steps behind, which is usually where they are Bell or no Bell against a Brady led Pats offense.

Ben Roethlisberger, who is now 3-2 in five AFC Title games (both losses to the Pats) was 31-for-47 for 314 yards with a touchdown and a pick.

Much will be talked about concerning the Steelers issues inside the red zone, but in the end no one is ever going to be Brady and the Pats after allowing 36 points, and it probably could have been worse if New England wanted it to be.

The pass rush was null most of the night by the Steelers, and a secondary that had made plenty of strides during the teams’ long win streak after sitting at 4-5 looked more like it did the first nine games, allowing way too many yards and not making plays when they had the chance.

Brady threw for 222 yards in the first half as the Pats built a 17-9 lead, but still the Steelers were in it as the offense played motivated, and it seemed despite not scoring the TD late in the first half they had a shot as they got the ball first in the second half.

Instead they went 3-and-out, and New England got a Stephen Gostkowski 47-yard field goal to make it 20-9, and from that point on the game was basically over.

The Steelers scored one meaningless TD late in the game to pull it to 36-17 after the extra point, but by then many Steelers supporters were already talking about next season or were looking for other Sunday night viewing options.

Don’t kid yourself, the Steelers have plenty to be proud of in 2016, but at the end of the day, if they don’t figure out a way to at least challenge Tom Brady when titles are on the line, the results when the season is on the line will likely always be the same.