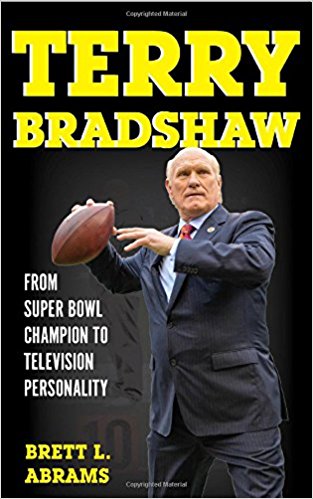 When it comes to the greatest quarterbacks in Steelers history, there’s no doubt that it’s a fun and healthy debate between current Steelers quarterback Ben Roethlisberger, and four-time Super Bowl winning quarterback Terry Bradshaw.

The two have been compared since just about days one, highly publicized first round draft picks that have brought Lombardi trophies to the Steelers franchise.

While Ben still has work to do, Terry has made an excellent second career, one of which is chronicled in a new book out just in time for the holidays – “Terry Bradshaw: From Super Bowl Champion to Television Personality” by author Brett Abrams.

The book is a great account of the Hall of Fame QB, and his transition from throwing passes to the likes of Lynn Swann and John Stallworth, to trading barbs with the likes of Michael Strahan on the set of Fox Football Sunday.

Abrams does a solid job of what Bradshaw has done following his career on the field for the Steelers, becoming a true cultural icon through his ventures into television, movies, and music.

Bradshaw, even as a player, always wanted more, and always seemed to have his eyes on the prize of what to do when his career was over, and if you’re interested in that aspect of his life, you will for sure want to check out this new book about the Steeler legend.

The book gives some great insight as to the rise of Bradshaw, as well as his fight and struggle along the way to becoming the celebrity he is today and has been in the public spotlight for close to the last 50 years.

The author carefully talks about how Bradshaw has become a lot more in his life than a guy throwing a football, he speaks in great detail of how multi-talented Bradshaw is, and how he’s been able to market that after his final touchdown pass was thrown in 1983 against the New York Jets.

If you’re looking for a great Steelers read this winter while the black and gold are looking to reach a seventh Lombardi, try this 328-page account of Bradshaw, you won’t be disappointed.

Steelers Don’t Exactly Earn Style Points, But Do Enough to Top Packers 31-28 to Move to 9-2
Steelers Lose Shazier to Scary Injury, Overcome Bengals 23-20 to Move to 10-2