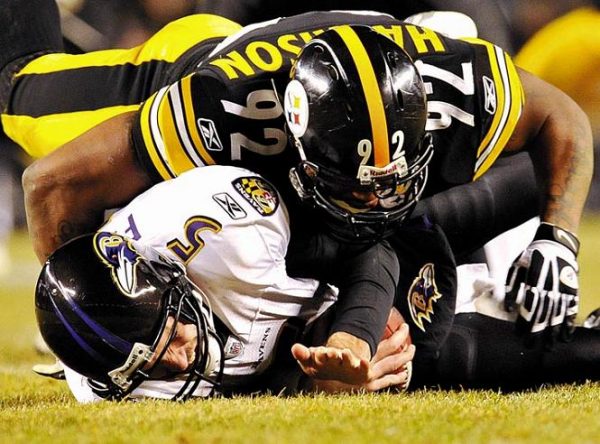 In what you could label ‘Sleeping with the Enemy,’ today the Patriots are chatting with the Steelers all-time sack leader James Harrison, who was released on Saturday by the team in a surprising move.

ESPN’s Field Yates broke the news that Harrison is in Foxboro today, and that he could be a player who could give New England some pass rushing help as they get set for the playoffs.

The 39-year-old signed on with the Steelers as an undrafted free agent out of Kent State back in 2002, and was the NFL Defensive Player of the Year back in 2008, the season the Steelers won Super Bowl XLIII.

After a season with the Bengals and a brief retirement, the Steelers re-signed him to a two-year, $3.5 million contract that included $500,000 guarantee this past March before he was waived last week.

In 2017, Harrison has appeared in five games and recorded three tackles and one sack for the Steelers.

Will He Be Back? Lots of Talk on If James Harrison will be Back with the Steelers
Steelers Play Scrooge in Houston in Beat Down of Texans; One Hurdle Remains Before Playoffs