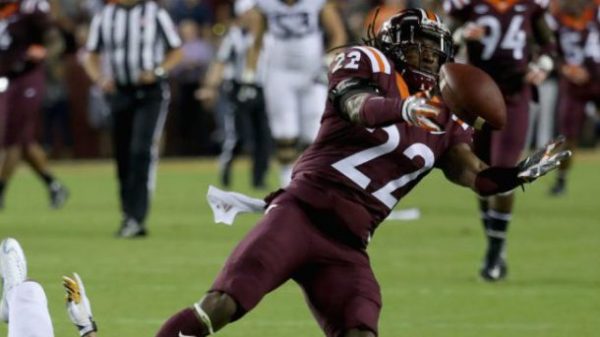 There wasn’t a dry eye in the crowd in Dallas on Thursday night when Steelers linebacker Ryan Shazier walked out to announce the black and golds first round selection of Virginia Tech safety Terrell Edmunds with the 28th pick in the 2018 NFL Draft.

Edmunds is a player the team has had their eyes on for a long time, one they think will be able to come in and make an impact sooner rather than later.

The Steelers according to CBS Sports got a ‘B’ for their pick of Edmunds.

Pete Prisco: He was a guy who was really rising late in the process. The Steelers get a nice playmaking safety.

Chris Trapasso: Height, speed safety prospect with below-average recognition ability. Easily sucked in on play-action and against double moves. His athletic profile as an explosive linear athlete makes him an enticing project.

—Is a versatile athlete with an NFL frame (6’0″, 217 lbs) whom Virginia Tech used as a linebacker, scout-team corner and safety.

—Has above-average change-of-direction skills and good lateral agility for someone his size.

—Is excellent in tight spaces and has the ability to knife gaps and play aggressively in run support.

—His competitiveness and hustle is evident on film. He’s always downfield to finish plays and pushes through the whistle.

—His brother Tremaine will be drafted in the top 15 and his father, Ferrell, played in NFL. There’s no question he has the profile to compete at the highest level.

CAREER NOTES
Played in 37 games, making 31 starts, over a three-year span at Virginia Tech…totaled 182 tackles, including 6.5 stops for losses.

2017 SEASON
A third-team All-Atlantic Coast Conference selection…started all 10 games played, recording 59 tackles including 2.5 tackles for losses and 1.5 sacks, along with three pass break-ups and two interceptions…made eight tackles, one sack and one interception vs. Delaware…tallied 10 tackles against Clemson.

2016 SEASON
Honorable Mention All-ACC…played in all 14 games (13 starts)…produced 89 tackles, 2.5 stops for losses, four interceptions and recovered one fumble…earned ACC Defensive Back Player of the Week honors (Oct. 24)…posted 12 tackles and recorded a 20-yard reception in the ACC Championship against Clemson….tallied five tackles and an interception in the Belk Bowl vs. Arkansas.

2015 SEASON
Appeared in 13 games with eight starts…amassed 34 tackles with 1.5 tackles for losses, along with a fumble recovery…posted seven tackles with a stop for a loss vs. North Carolina State…had one tackle with two passes defensed in the Independence Bowl vs. Tulsa.

HIGH SCHOOL
Played at Dan River (Ringgold, Va.) High School…a Class 2A West All-Region first-team selection as a running back and the Offensive Back of the Year in the Courthouse Conference 37…an All-Conference 37 first-team selection in his senior year after logging 1,753 rushing yards on 171 carries with 25 touchdown runs while catching nine passes for 111 yards and a touchdown…added 53 tackles, two for losses, and two interceptions, scored a total of 29 touchdown in his senior year.

The 2018 Steelers Season Schedule is Out – A Quick Glance at the Good and the Bad
Steelers Dump Safety J.J. Wilcox Following Picking Two Safeties in the Draft