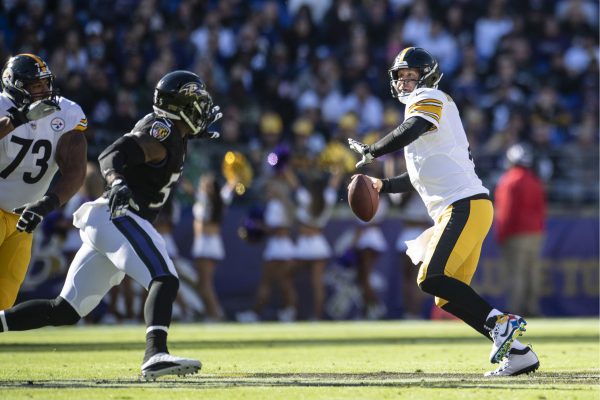 The Steelers were trying to close out the win Sunday as they led 20-13 with the football, but Steeler Nation held their breath after Ben Roethlisberger went down with what looked like it could have been a severe shoulder or possible collarbone injury after he was tackled from behind on a scramble and run by Ravens LB Za’Darius Smith.

With Ben in obvious pain, the thoughts turned not only to how this team was going to be able to close out the game against the Ravens, but also the game just four days later against the Panthers.

Just like he always seems to do though, Roethlisberger bounced right back, missing just one play and coming back into the game, hitting a huge 51-yard pass play to Jesse James.

Josh Dobbs got a chance to come in, and with the Steelers facing a 2nd and 20 from their own five-yard line, he threw a perfect 22-yard pass to the 27-yard line to Ju-Ju Smith-Schuster.

It was a gutsy call by Mike Tomlin to allow Dobbs to throw, and then Ben came right back in and led the team on a drive to get a huge field goal to extend the lead to 10 points at 23-13.