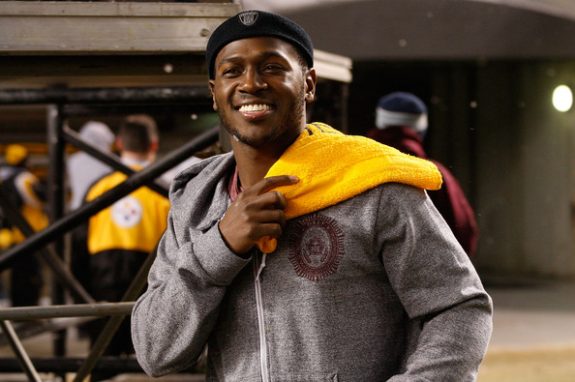 The NFL will investigate a recent domestic dispute involving Steelers wide receiver Antonio Brown for which he was not arrested.

“We will look into it,” NFL spokesman Brian McCarthy confirmed to Lorenzo Reyes of USA Today.

The incident took place Jan. 17 in Hollywood, Florida, where Brown has an offseason home. According to the incident report from the Hollywood Police Department obtained by USA TODAY Sports, a woman drove to Brown’s home to drop off their daughter and to get money from Brown for the daughter’s haircut. The report states that Brown opened the door and their daughter went into Brown’s home before he closed the door.

According to police, the woman then yelled to Brown asking for the reimbursement for the haircut. After Brown opened the door, the woman “positioned herself so Brown couldn’t shut his front door.”

At that time, Brown told the woman multiple times she had to leave though she acknowledged, according to police, that she refused to move. The report then states that Brown “used both hands to push her out of the doorway,” causing the woman to fall backwards to the ground.

According to the report, police later photographed an injury to the woman that showed “an abrasion to her left forearm” though the woman “advised of no other visible injuries.”

The report then states that the woman later met with police and declined to give a statement or press charges against Brown. Police then told the woman that the state’s attorney’s office could still seek to file charges, and the report indicates that the woman “became irate with detectives and stated she did not wish to have Antonio Brown arrested” and later said she “wished to ‘cancel” the report.

“The closed police report proves that Antonio Brown did absolutely nothing wrong, as insinuated by the recent headlines,” Brown’s attorney Darren Heitner told USA TODAY Sports in a statement. “Unfortunately, the media alluded wrongdoing on the part of my client in a ‘domestic dispute’ when in fact no wrongdoing ever occurred on his part. The complainant, who is the mother of Mr. Brown’s child, acknowledged that she refused to leave Mr. Brown’s property after being asked and further refused to leave the doorway of his personal residence. The complainant did not want to provide a statement or press charges, and asked to retract her report after it was made.

“The media must be held to a higher standard and should issue an apology to my client for harming his reputation without cause and without full report in their possession. Additionally, the complainant unnecessarily involved my client’s minor child in her false reporting, causing irreparable harm to a minor child. Therefore, Antonio Brown’s family law attorney, Jaclyn Soroka, Esq. will be filing an action with the Court today seeking full legal custody of his child accordingly.”

James Harrison Says It’s Not a Done Deal that Antonio Brown Won’t Be with the Steelers in 2019
Steelers May Use Transition Tag on Bell, But Only to Then Sign and Trade Him