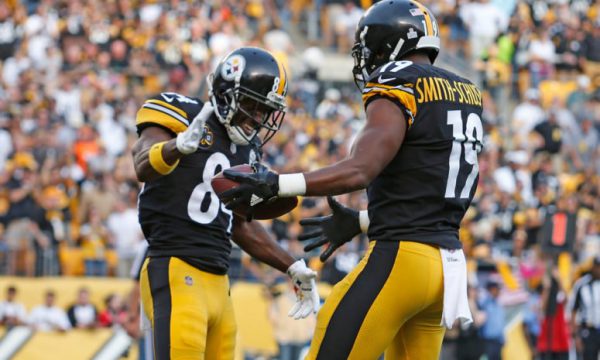 With the latest go around between Antonio Brown and JuJu Smith-Schuster in the books, one Steeler vet is finally speaking up and saying, basically, shut up.
Veteran guard Ramon Foster has issued what he called a “PSA” on social media telling any past Steelers (Brown and Le’Veon Bell in specific) to come to he and Maurkice Pouncey if anyone has any issues with the way they were treated by the franchise.

“Moving forward…any former player or affiliate of the Steelers who has an issue with anyone still in the locker room, please contact me or Maurkice Pouncey or anyone else you feel you can talk to,” Foster wrote.

“Whoever you have an issue with, we will get you their number so you can address them. I PROMISE. These media takes might give y’all good traffic on your social media outlets but the guys still in that locker room, who y’all still know personally have to answer for those comments. Call them what you want, but call them personally and tell THEM. Defend who you want to defend but you don’t have to mention the team at all.

“Whether you have a ring or played for one year…ENOUGH…CHILL. Most players at one point in their life want to take their kids back to the place where they once played, don’t burn too many bridges. It’s a long history of brotherhood more than anything, BUSINESS is one thing but let’s keep it at a minimum for the guys who have to answer for these comments moving forward.”

Good for Foster, who is one of the team leaders and returned the to the team this offseason despite having the ability to go elsewhere.

As for Brown and Bell, likely this won’t stop their mouths from running, but now at least one Steeler player is speaking up and speaking out on all the garbage that is being spouted on social media.