With Brown History, Look for the Steelers to Spread the Ball Around More in 2019 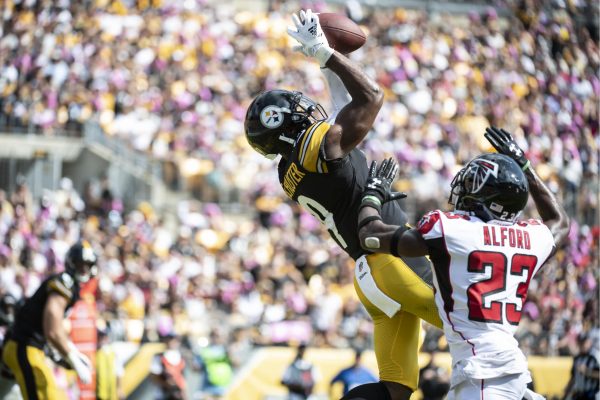 The Steelers want to spread the ball around to a wide variety of receivers in the wake of the departure of Antonio Brown according to Jeremy Fowler of ESPN.

“The Steelers believe they have at least nine viable pass-catching options,” Fowler writes, “which Roethlisberger will surely utilize.”

JuJu Smith-Schuster will step into the No. 1 role, but there are several players vying for targets behind him including second-round sophomore James Washington, free agent addition Donte Moncrief, and third-round rookie Diontae Johnson.

“Everybody’s pushing each other — you got a drop, you’ve got 10 push-ups,” free-agent addition Donte Moncrief said.

“Everybody’s trying to bring energy … Make plays, don’t come out here lagging … I feel like everybody’ going to be able to help. Everyone’s ready to play. Everybody knows JuJu is going to get a lot of attention. We have to be able to help him out, take some double-teams away and beat man so the defense has to cover everybody.”

Last season the Steelers threw the ball a league-high 689 times, so there should be enough work to go around, but one of those three might need to separate themselves to earn consistent fantasy value.

Despite an erratic rookie year, James Washington posted two 60-plus-yard games in the final three weeks last season and dropped 15 pounds in the offseason. He’s getting off the line of scrimmage quicker now.

The guess now is that Washington is going to be the number two, but don’t count out Moncrief, and expect another big year from TE Vance McDonald, who showed last season he can be a big threat in the team’s offense.