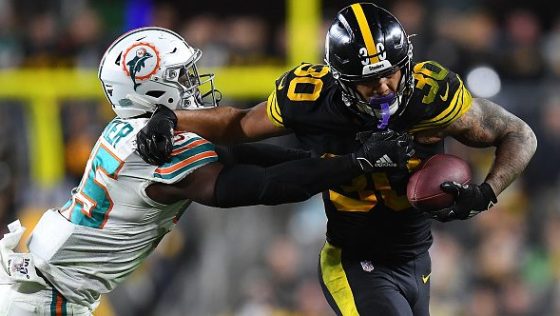 James Conner and the Steelers found themselves in a dogfight with the Dolphins on Monday night, but after falling behind 14-0 in the first quarter the team fought their way back and eventually pulled out a 27-14 win.

For his efforts in the 13-point win Conner was named today as the AFC Offensive Player of the Week.

The running back, who also suffered an AC Joint injury late in the win, carried the ball 23 times for 145 yards and a score in the victory.

Conner also caught three passes for 5 yards. It was the first 100-yard game this season for the now 3-4 Steelers.

It remains to be seen if Conner is going to be able to go Sunday when the Steelers host the Colts at Heinz Field.

Steelers at Chargers: Three Keys to a Pittsburgh Win in Los Angeles
Ex-Steeler RB Le’Veon Bell Claims the Steelers Called the Jets About a Possible Deal for the RB