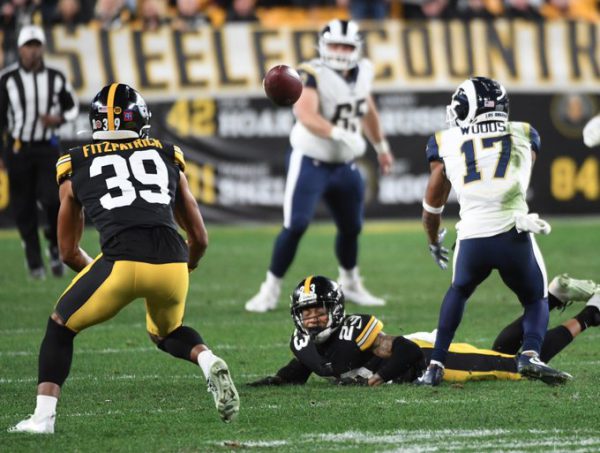 The Steelers defense is becoming one of the more elite units in all of the NFL, and after two home wins in a row over the Dolphins and Colts, the team had their toughest test as they took on the defending NFC Champion Los Angeles Rams.

The outcome took close to 60 minutes to figure out, but the Steelers D again stepped up, and the team won their most impressive outing of the season, topping Los Angeles 17-12.

The victory puts the team at 5-4 on the year, impressive after the team started the season 1-4. Now the club will have a short week as they travel about two hours to take on the Cleveland Browns in a key AFC North game on Thursday night in Cleveland.

For now, here’s a quick breakdown of the huge win, and how exactly this team was able to pull this win off to put them clearly in the race for the playoffs in the AFC.

This team is getting better and better each week on the defensive side of the ball, and once again they stopped the Rams in every phase in the win.

Let’s consider some stats that clearly leaned the Steelers way. The Rams were 1-for-14 on third downs, 0-for-2 on fourth down.

They scored three points on offense, and the Steelers put up four sacks to go along with four turnovers, three picks and a fumble recovered.

The defense also put up the winning points late in the second quarter as they got a gift fumble return for a score from Minkah Fitzpatrick to make it 14-7.

This team has the best defense in the AFC North, and they are going to keep themselves in games no matter what as long as this unit plays this way.

2. A Drive to Remember

When you look at this game and the importance of momentum, all you have to do is look at the Steelers drive that started at 10:46 of the fourth quarter with the Steelers leading the game 14-12.

Mason Rudolph wasn’t perfect by any means in this game, but he was able to hit some key third downs on the draft, and even a fourth down which was a gutsy call that could have killed the team’s momentum if they didn’t convert.

The three points were huge as it pushed the lead out to make it where the Rams were forced to go for a touchdown instead of a field goal pushing them into the lead.

When this season is over no matter how it ends, this drive will go down as one of the most impressive of the season.

3. Fitzpatrick Has Changed This Team

It may go down as the one of the most important trades in the history of the franchise when it’s all over, and for now, the deal with the Dolphins to give up a first-round pick for safety Minkah Fitzpatrick has paid off in a ton of ways.

Since he’s arrived, he’s completely changed this defense. In just seven games with the franchise, Fitzpatrick has five picks, two defensive scores (one each the last two weeks), one forced fumble and one fumble recovered.

Maybe on another Sunday the Steelers defense gives up a drive to the Rams that eventually loses the game. This time around, Fitzpatrick saved the day off a deflection off Rams wide out Robert Woods, picking off a pass to seal the win.

He’s having fun, this defense is having fun, and Fitzpatrick might be the MVP of this team nine weeks into the season.