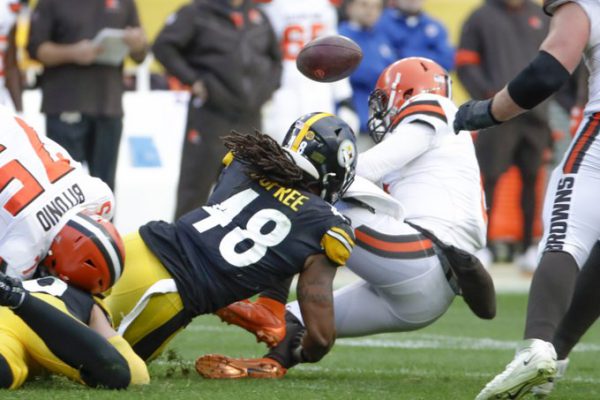 The Browns may have laid the first punch this season in the reborn rivalry with the Steelers, but in the end the black and gold scored a resounding knockout at Heinz Field.

In a game that can only be described as a ‘must-win,’ the Steelers answered the call despite trailing early 10-0, as they scored 20 straight points and the defense stepped up with yet another big play in the end, as they topped the Browns 20-13 to move to 7-5 on the season.

Maybe more important is the fact the Browns drop to 5-7, and according to ESPN their playoff chances went from 20 percent to start the day down to six percent now.

The win came after a dismal first 15 minutes, but credit has to go to undrafted QB Delvin Hodges, who got some amazing help from his wide outs but rallied the troops to score 10 points in the second quarter, and 10 more in the second half to get the win.

Here’s a couple takeaways from the win, as the team will now get ready for a road trip to Arizona to play first overall pick Kyler Murray and the Cardinals.

1. The D Lays Down the Hammer

After the Browns went up and down the field on two of their first three drives, the Steelers not only woke up on offense, but also their defense finally started to answer the bell, and put pressure on Baker Mayfield and the Browns.

Mayfield and the Browns offense carved up the Steelers, but finally they started to make plays, and by the end of the first half they captured the momentum and it carried over to the third quarter.

It was a great effort by a group that has played as well this season as it has since their Super Bowl year of 2008. It was fate that former Browns CB Joe Haden ended the last Browns chance with an interception to seal the win.

Delvin “Duck” Hodges made one bad mistake, but that also could go on rookie wide out Diontae Johnson, who totally stopped his go-route which caused a bad 4th quarter interception.

Other than that, and not taking a sack in the final two minutes on third down, it was hard to find things wrong in Hodges game Sunday.

He again played well, and once he got comfortable he played with a ‘nothing to lose’ attitude, putting the ball downfield and letting his wide outs make plays.

He deserves the starting job the rest of the year.

3. A Wide Out Group and Made Plays

It’s tough to think that a group of the following players – James Washington, Johnson, Tevin Jones and Deon Cain outplayed a group of Jarvis Landry, Odell Beckham Jr., and Rashard Higgins, but mark it down – they did.

Washington had four balls thrown his way, and caught everyone of them, including a great touchdown catch and totally changed the momentum of game.

It sure would be nice to get JuJu Smith-Schuster back from his knee injury, but for the second straight week this unit with a number of players not a lot of people have ever heard of, played well enough to earn a ‘W.’

Video: Hodges and the Defense Save the Day for Steelers in 16-10 Win Over Bengals
Video: Steelers Keep Wild Card Hopes Intact, Top Browns 20-13 to Move to 7-5