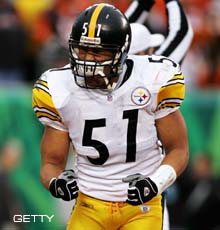 The Pittsburgh Steelers on Tuesday retained one of their top linebackers as according to John Clayton of ESPN.com, the team signed James Farrior to a 5-year, $18.25 million including a $5 million signing bonus.  With the signing, the Steelers have one of the deeper linebacker corps in the NFL; the team believes that Farrior has 3 more years of football in him; Farrior was originally a first-round pick by the New York Jets who has turned out to be one of the best free agent signings in Steelers history. In his 5 seasons with the team, he has recorded 562 tackles in 78 starts.

Batch Back to Work
Steelers Wait on the Status of Foote