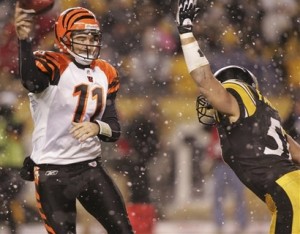 While the Steelers slept walked through the first quarter on Thursday night, the one thing this years version of this team has is a defense that can allow them to get off to a slow start. Even spotting the lowly Cincinnati Bengals a 7-0 lead 12 minutes into the game, the Steelers offense had more than enough time and the defense more than enough big plays in them for the Steelers to gut out a 27-10 win at Hienz Field to move to 8-3.

Ben Roethlisberger played his second solid straight game after the meltdown vs the Colts three weeks ago, and was 17-for-30 for 243 yards with a TD, and he also clinched it with an 8-yard TD run with 2:15 left that pushed the Steelers lead from 20-10 to 27-10. Overall the Steelers offense was good again, putting up 364 yards and 20 first downs to just 208 for the Bengals and 11 first downs.

As far as the Steelers defense goes, it remains the best in the business, even after getting off to a somewhat slow start. The NFL’s #1 ranked unit allowed Ryan Fitzpatrick and the Bengals to go 62 yards in 11 plays for their only TD of the night on their second drive of the game. Fitzpatrick squeezed in a TD pass to Glenn Holt, playing for the deactivated Chad Ocho-Cinco at the 3:08 mark of the first quarter to make it 7-0.

The Steelers offense had just 30 yards on their first three drives, all punts, and then finally got things going in the second quarter, as Roethlisberger led the team on a nice drive that went 8 plays and 54 yards for the tying score. They had a 4th-and-1 at the Bengals four, and instead of trying to rush Mewlede Moore, as they have done the last two weeks, this time they gave it to Gary “Muscle” Russell for a one-yard gain. Two plays later Big Ben hit Heath Miller for the tying score.

The Steelers drove again on their next possession, going 11 plays and 72 yards as Jeff Reed hit a field goal to make it 10-7. That would be the score at the half, as the Steelers D went in the locker room ready to warm up against Fitzpatrick and the Bengals. It worked. Coming out and getting another field goal to make it 13-7, the Steelers D dominated the rest of the night, as Cincy had four straight possessions, all three-and-outs, and just 14 yards in those four possessions.

The Pittsburgh offense again rallied, as with Moore in the game, they went 64 yards in 7 plays, and Russell took it the final two yards after Roethlisberger hit Miller for a big 19-yard gain to the two to set up the score to make it 20-7 entering the fourth quarter. The Bengals finally got some yards, and ended the drive with a field goal to make it 20-10.

Now at 8-3, the Steelers will get a rest before they head to Foxboro to play the New England Pats on November 30th at 4:15pm. They have four huge games coming up, with the Pats, Cowboys, at Baltimore and at Tennessee. While they have a great shot at the #2 seed in the AFC with that defense, they had better win get that offense playing better or they may be playing in week one of the playoffs.