A Look Back: Rewinding to the 2006 Steelers Draft 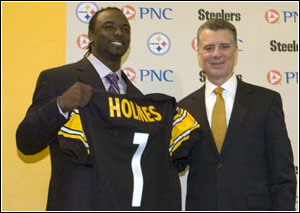 They say it takes three years for a draft class to show it’s true colors. With that, today here at Steelers Gab we start to look back at some of the draft classes, and today it’s the 2006 Draft Class, the last one of former head coach Bill Cowher:

1. Santonio Holmes, WR, Ohio State – 1st Round –
The Steelers gave up a third and fourth round pick to the Giants to move up to No. 25 to grab Holmes, but after watching Super Bowl 43, is there any doubt his importance to this team? In three seasons he has 156 catches for 2587 yards and 15 touchdowns, and the best part is many think he has not even come close to peaking. If he stays out of trouble, he can become an even better wide out than he already is.

2. Anthony Smith, S, Syracuse – 3rd Round – Smith started out looking like a player that would have a big impact on the Steelers roster in the future, but then his game started to slip, and his mouth got him in trouble with a stupid promise of a win last season against the undefeated Pats. He played in 16 games in 2007 with 68 tackles, but then in 08 played in just 14 games and had just 9 tackles. He was not protected as a free agent, and signed with the Packers a few weeks ago.

3. Willie Reid, WR/RS, Florida State – 3rd Round – Reid lasted two years with the team before being released last August. Played in 1 game in his rookie year, and 6 in 2007 with 4 catches for 54 yards. Never really made an impact, and last was with the Eagles but is out of football now.

4. Willie Colon, G, Hofstra – 4th Round – All Colon has done is start every game for the Steelers the past two seasons. He came from Hofstra, and stepped in nicely at tackle with two games left in his rookie season after Max Starks was injured. He has been the starter ever since. Just signed a one-year deal to stick around, and could be on the verge of a much richer long-term deal.

5. Orien Harris, DT, Miami – 4th Round – Never made an impact with the Steelers, and they left him go as he then bounced to the Browns, Bills and Saints before finally finding a home in 2008 with the Bengals, where he played in 14 games for the Bengals, making 14 tackles.

6. Omar Jacobs, QB, Bowling Green – 5th Round – Was fun to watch in the 2006 preseason, but at the end of the preseason, he was sent to the practice squad. Jacobs was released from the practice squad and cut from the team following training camp. He now plays for the Florence Phantoms of the American Indoor Football Association. Has also found his way onto the rosters in Philly and KC.

7. Charles Davis, TE, Purdue – 5th Round – Now a practice squad player for the Jaguars, never made the Steelers roster and has also been a member of the New York Giants (twice) and Carolina Panthers.

8. Marvin Philip, C, California – 6th Round – Philip is now a member of the Buffalo Bills, this after being signed by the club back on January 29th. Philip spent part of the 2008 season on the New Orleans Saints practice squad and has also spent time with Cleveland.

9. Cedric Humes, RB, Virginia Tech – 7th Round – Currently not on an NFL roster, but did last a season on the Steelers practice squad/injured reserve list. Attended Virginia Tech and was instrumental in their 2005 ACC Coastal Division Title. He was named the MVP of the 2006 Toyota Gator Bowl. Was signed by the Giants for their practice squad on December 21st of 2006, but was released in July 2007.