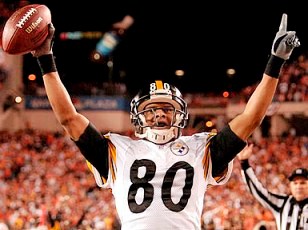 We all know that the Steelers have a rich tradition of big plays over the course of their history. From six Super Bowls to countless playoff games to huge wins, the Steelers are the most celebrated NFL team in history for a number of reasons. Today continue our countdown of the “Top 10 Catches in Steelers History”. Today, we throw out Number 8. Be back tomorrow for Number 7:

Number 8: January 8th 2006 – Trickery to Cedric Wilson Catches the Bengals by the Tail in the Wild Card Game

No one expected the Steelers to make the run they did in the 2005 NFL Playoffs, but here they found themselves on the first Sunday of the playoffs going up against their rivals in the Bengals in Paul Brown Stadium. It was a bloodbath type of affair, as early in the game the Steelers knocked out Bengals QB Carson Palmer, but still found themselves down 17-7 in the second quarter. The team was able to get back into the game with a late second quarter TD, and by the start of the 4th quarter led 21-17. Going for the kill from the Bengals 43, receiver Antwaan Randle El took a direct snap, ran to his right, and threw the ball back to QB Ben Roethlisberger — who then connected with Cedric Wilson for a 43-yard touchdown reception that increased the lead to 28–17. It was the type of trick play that landed then offensive coordinator Ken Whisenhunt a head coaching job in Arizona, and was the launch of a playoff run that resulted in a 5th Lombardi trophy.