Scouting the Enemy: #11 in the AFC – Jacksonville Jagaurs 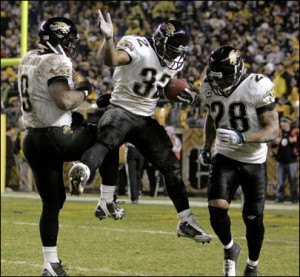 The Good – Maurice Jones-Drew is one of the best backs in the NFL, and he right away gives the Jags a solid run game. David Garrard, who has been a thorn to the Steelers in the past, can run as well, giving them another threat when he drops back to pass. The team inked Aaron Kampman to play DE, and if he can regain form of two years back with Green Bay when he had 9.5 sacks, he will add to a D that needs new fresh faces.

The Bad – Garrard is under fire for not being as effective as he was two years back, and there’s talk of making a change to Luke McCown. The WR core isn’t that strong, and Mike Sims-Walker is a good player, but was suspended for being late to a meeting last season. The D does not fear anyone, and they are counting on pickups Kirk Morrison and Kampman, who could be big payoffs or big busts.

Steeler Connection – It seems like these two teams play all the time, but this year is not one of those years, unless that is they can find a way to sneak in the playoffs, but with the Colts, Texans and Titans all better than them in the AFC South, that is a long shot to say the least for the cats.

Scouting the Enemy: #12 in the AFC – Kansas City Chiefs
Poll: What returning Steeler will have the biggest impact in 2010?