Scouting the Enemy: #14 in the AFC – Oakland Raiders 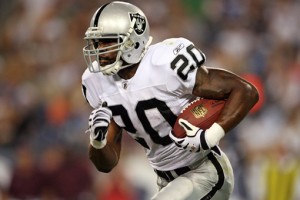 The Good – They have maybe the best CB in football in Nnamdi Asomugha, and have added John Henderson, who if he can play like he did with the Jags will add some punch to the D-line. They also resigned Richard Seymour, who was pretty solid last year in his first year in Oakland. Darren McFadden will be counted on to have a big year at the RB spot, and Jason Campbell could add some stability to the QB spot they have lacked the past few seasons.

The Bad – They have a huge hole at the WR spot, as their top two on the depth chart is 2nd year WR Darius Heyward-Bey and Chaz Schilens. Look for them to look at the waiver wire for possible WR’s that can help. Their O-line isn’t very good, and they will give up some sacks and have issues at times opening holes for their RB’s. They are the Raiders, which means per usual they will make dumb errors at key points.

Steeler Connection – The teams meet November 21st at Heinz Field. It is the 2nd straight year they meet in Pittsburgh, and the Steelers better not overlook the Raiders, as they fell to them last season in the last :15 seconds. As long as the team does what they should, this time they should overcome what I think will be the 2nd worst team in the conference.

Scouting the Enemy: #15 in the AFC – Buffalo Bills
Would the Steelers Even Think About Terrell Owens?