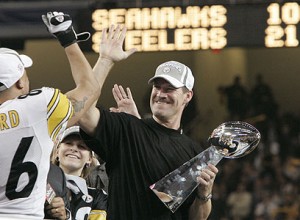 The talk about Bill Leavy’s admission about his errors in Super Bowl XL continues. In today’s twist, Mike Pereira, who was the head of officials at the time, says that Leavy’s calls DID NOT decide the outcome of the day, despite what crying Hawks fans continue to say.

“Did Leavy’s calls determine the winner of Super Bowl XL? Absolutely not!” Pereira writes at FoxSports.com. “In truth, there were missed calls that went against both teams. Let’s all put aside our allegiances and go back four years and look at the game objectively. If we do, we will see that the Seahawks did not play well and neither, actually, did the Steelers.”

Pereira goes on to write that “The officials also did not have a great game,” but he thinks Leavy is actually wrong about one of the “kicked calls” he owned up to. Leavy regrets flagging offensive tackle Sean Locklear for a holding penalty that negated a big play for the Seahawks, but Pereira says Leavy actually got that call right.

This story needs to just go away. The Steelers have gone on to win another Super Bowl, and the Hawks have done nothing. Leavy should have kept his mouth shut, and even if he thinks he was wrong, it’s been four years and no one cares at this point – except Leavy that is.

Enter the Contest for an Autographed Copy Of My New Book – “100 Things Steelers Fans Should Know and Do Before They Die”
Hot Day at Camp; Harrison Sits with Sore Shoulder Again