Are you ready for….Colt McCoy?! 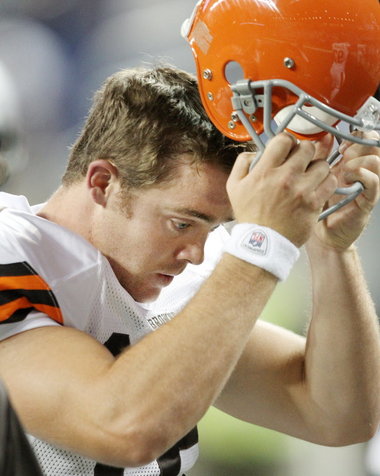 Now you never like to start counting on wins before they happen, but you have to believe that Dick LeBeau and his band of warriors have to be seeing blood today.

Due to injuries to their two sub-par QB’s, Seneca Wallace and Jake “interception machine” Delhomme, the Browns seem to be leaning towards starting Texas rookie Colt McCoy at QB Sunday when the Browns travel to Pittsburgh.

The Browns took McCoy in the third round, but the clowns had so little faith in him, there was chatter late in preseason that he wouldn’t even make the team.

Then Sunday at home against the Falcons, instead of McCoy getting a chance, they put a less than 100 percent Delhomme in the game, and he ended up getting even more hurt and will miss even more time according to reports.

The backup for McCoy on Sunday – Brett Ratliff, who was just signed Monday as well.

Remember when the Browns threw a rookie named Eric Zier against the Steelers back in 1995? The Steelers won that game by 20. Sunday may be even worse – which will be even more fun.